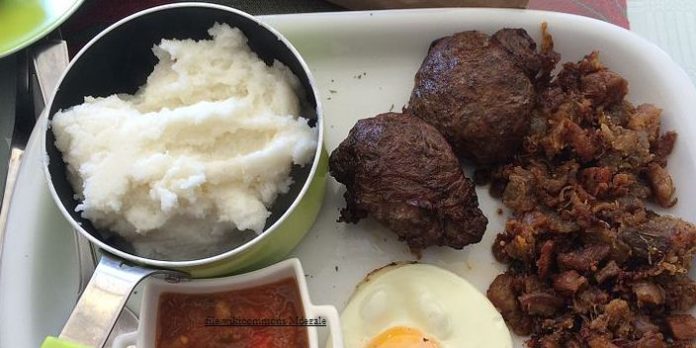 Isidudu is a southern African morning pap, which is usually prepared with sour corn flour, curried cabbage, pumpkin, and liver.

What sets this delicacy breakfast meal apart from any regular pap is its unique preparation process and veggie add-on.

Isidudu recipe can be an excellent pick for those looking aiming for a healthy breakfast. Isidudu is loaded with higher nutritional value.

In this post, we bring this amazing recipe right to your kitchen.

But before then, here is a lowdown of Southern Africa culture.

Southern Africa cuisine is a blend of many cultures and is sometimes called “rainbow cuisine.” The culinary art experienced here was majorly influenced by Asia, Europe, and Africa. The region has two indigenous groups, which include the Bantus and Khoisan.

The Bantu speakers practice agriculture while the Khoisans are archeologists and hunters and gatherers. Their way of living influenced the foods and the culture experienced here since ages and even until now.

Historically, milk was one of the most crucial components of the Southern Africa diet. Cattles are highly valued, and those who own large herds of cattle are considered to be rich. When a man plans to marry, he is expected to compensate his in-laws with cattle as dowry.

Women do all the food preparation and are expected to take care of the children. They also take part in planting and taking care of the crops. Eating is done with the right hand. Guests are not allowed to turn down any drink or food offered to them by the hosts as it’s deemed disrespectful.

Now let us switch gears and get down to our Isidudu recipe. Below is what you need:

Note: You can also enjoy your Isidudu with milk and sugar