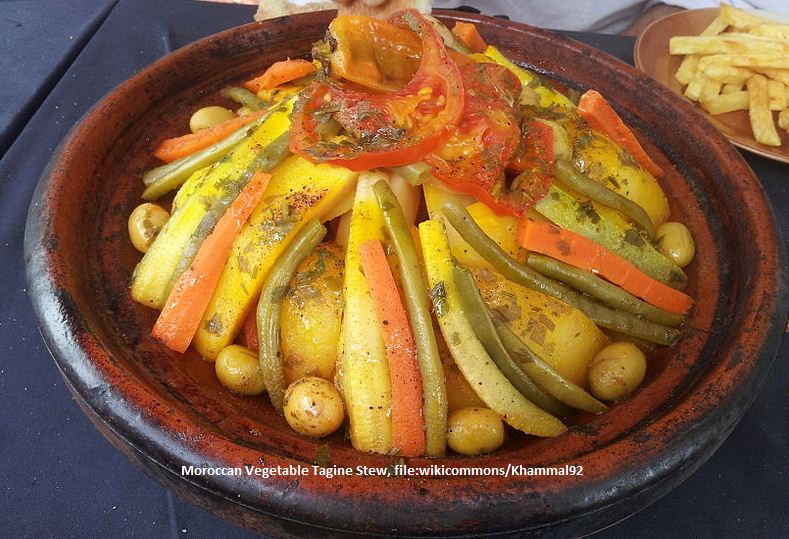 Morocco is one of the African countries that is known for its unique and fine cuisine Tagine media. History has it that Moroccan cuisine is a blend of Arabic, Mediterranean, Indian, and Andalusia with a slight influence of Sub-Saharan and European culture. Most of the foods have an intense aroma that are satisfying to the taste buds and that literally invigorate eating moods.

You will be dazzled to know that most dishes are prepared in a Tagine media. Before we take you through our Moroccan vegetable Tagine stew, get to know more about this cooking vessel.

What is a Tagine?

A Tagine is a cone-shaped vessel which features unglazed clay or ceramic materials.

While you may use any available option, you will not get the same results as when you use unglazed Clay Tagine. When seasoned properly, unglazed clay Tagine media brings out an intense earthy flavor to your food. And if you have never used this fantastic cooking vessel, you may be wondering how it feels like cooking with a Tagine.

What to expect when cooking with a Tagine

Cooking with a Tagine is different from using a conventional pot. Regardless of the type you opt for; you have to season it before using it. Both ceramic and unglazed clay Tagines are not designed to withstand high temperatures. So in case you opt to use an electric stove or cooktop, be sure to use a diffuser. Exposing it to extreme temperatures will crack it. One essential ingredient when cooking with a Tagine is `patience.`  Aside from serving as a cooking vessel, a tagine can also be used as a serving dish.

Now that you know what is needed of you when cooking with a Tagine, let’s have a look at how to season it.

How to season a Tagine- a step by step guide

Note: Season your Tagine a day before so it gets enough time to cool down

Now, let me show you how to prepare your Moroccan vegetable Tagine media stew.

Check out other AfroGist Media food posts and get cooking!