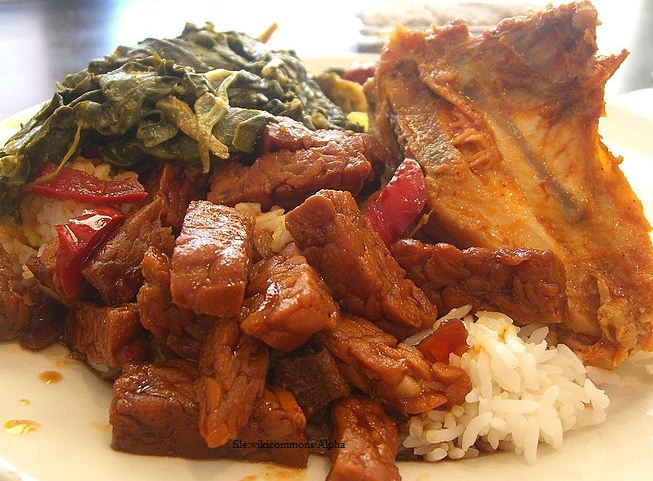 Akoho sy Voanio madagascar recipe is a tasty dish prepared with chicken and coconut milk. The delicacy is one of the popular dishes that madagascar recipe prides itself of. What makes this dish stand out from any other ordinary food is its taste.

The coconut milk flavor and rich chicken relish bring out the real authentic Malagasy cuisine. Rice is a base in Malagasy cuisine and is served in almost every dish and Akoho sy Voanio is not an exception. The delicacy is loved by many and is one of the Malagasy Christmas foods.

Though you can prepare the dish any time of the year, its taste and richness makes it particularly a go-to meal during Christmas time. Today, we bring you this special Malagasy dish right to your kitchen.

But before we get down to cooking, let’s have a quick overview of Malagasy culture.

Malagasy people value their culture and this is evident in their food, cultural beliefs, arts, and music. Over half of the Malagasy populations are Christians (thanks to colonialists’ missionary!), 7% are Muslims, while the rest of the population practices Hinduism and African traditional religion. The Christians value their culture and honor their ancestors. When a Christian dies, the corpse is taken to church for blessing before a ceremonial send-off.

The dead are buried close to where they lived temporarily. After some time, the bones are taken out of the tomb and enshrouded for transfer in an ancestral tomb. The loved ones decide where to transfer the bones (can either be in a mother’s or father’s tomb) depending on the deceased ancestry. Ancestral tombs are sacred, especially for the royal families.

[bctt tweet=”In Malagasy, the deceased are temporary buried near where they used to live, and their remains are enshrouded and transferred to the deceased ancestry”]

The dead are viewed to have some powers to impact the living. Traditional rituals are conducted by the family to honor the dead to avoid the evil spirits from haunting them. The belief is also popular among all Africans and is practiced in most countries.

Now let’s get down to cooking. Here is what you need.

If you love this Akoho sy Voanio, you may also like