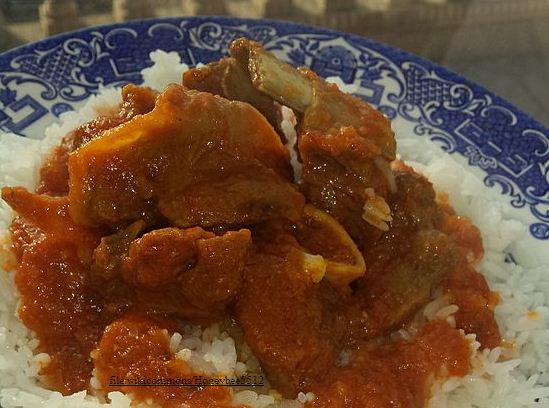 Caldeirada de Cabrito is an Angola Recipe delicacy which is prepared with goat meat and Chourico with a little Piri Piri to give it a savory flavor. The dish is prepared on special occasions but can be enjoyed at any time of the year. As a Portuguese colony, Angola cuisine is majorly influenced by its colonizers. This is evident not only in food preparation but also in its the dining etiquette and culture.

Let’s have a quick look at Angolan culture and how it was influenced before we get down to our Caldeirada de Cabrito recipe.

The culinary art felt in Angola is a fusion of Mozambique, Portuguese, and Brazilian flavors. The main staples include rice, pork, chicken, beans, and funje (carbohydrate dish prepared using cassava and have a similar texture like mashed potatoes). Different sauces and vegetables like tomatoes, okra, and onions are used.

Fish and seafood are popular along the coastal strip. Most seafood dishes prepared in the coastal part are spiced, and the cuisine practiced here is said to have a strong influence from Portugal.

Angolans are very welcoming. They love inviting visitors to their homes. Though the cuisine has influences from different countries, the Portuguese seem to have a significant impact. As mentioned earlier, this applies to both when entertaining guests and also to mealtime.

When invited for a meal, you should dress well. Bring along gifts like flowers, fruits, and chocolate for the host. Food is served in a large communal bowl where it’s then scooped with serving spoons to individual bowls.

Serving food is done in a hierarchy with the eldest person first. When offered the last serving of food, you should turn down the offer at first and wait for the host to offer it the second and third time where in this case, you may accept.

When talking to someone older than you, keeping indirect eye contact is a sign of respect. While it could be the deemed as a sign of disrespect in the West, engaging with eye contact in this context is frowned upon in many African nations. Though this culture is slowly fading, it is still practiced by some individuals, and expected by many elders.

[bctt tweet=”In Angola, when talking to an elder, you are supposed to keep indirect eye contact as a sign of respect”]