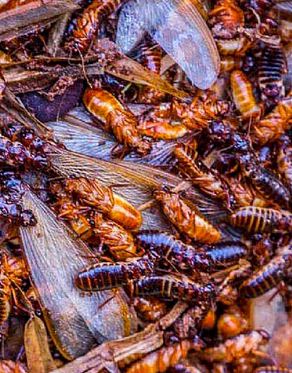 Nswaa is a traditional Ugandan snack that is prepared using termites and spices. Nswaa is highly nutritious with high levels of proteins. The termites are popular during the rainy season, and those who get the chance to capture them know that the insects do not disappoint. Due to its high nutritional content, the snack is loved by many.

Walking outside during the rainy season to catch termites can be very tricky, but the locals have their various systems of catching them. For those who do not have the time or bandwidth to capture these treasured termites, you can always buy from the street vendors.

Nswaa is popular during the rainy season, and is found almost across the globe. Not only does it enrich your body with proteins, it has other elements that could build up your immunity against common cold and illnesses. These awesome termites are foods of the gods. Created by divine, and brought to you in seasons. Unlike other edible insects or animals, you don’t kill these termites, you catch them life.

When you taste a well spiced roasted termites, you’ll forget those power protein bars for sure. A perfectly fried dish of Nswaa will melt in your mouth!

Uganda is home to over 50 different ethnic communities. Its ethnic diversity has brought about different cultures. While each ethnic group has its language, the country is united together by one National language, which is English.

Religion has also contributed to the unity and oneness of the Ugandans. The most popular religion here is Christianity, which constitutes 83% of the population, Muslims 12%, and the rest are Hindus and Sikhs.

Ugandan cuisine is a blend of traditional foods with Arab, Asian, and English flavorings. While every ethnic group has its unique cuisine, most traditional dishes have a starch base with meat and bean sauces. The food is perfectly spiced to enhance the flavor. The starch comes from Matooke or Posho.

Meals are prepared and served by women. Ugandans are very welcoming. And as the African saying goes, “Dine with a stranger but preserve your love for your family.” The moment a visitor walks into a Ugandan home, he or she is ushered in with a drink or food.

Aside from cooking, married women are also expected to take care of children and other household chores. Men, on the other hand, are expected to fully provide for the family, and take part in community-building activities.

Now, lets us dive into our recipe.

Nswaa is indeed a tasty and nutritious snack. Its preparation is faster and straightforward. The only challenge is the capturing process since it takes time and some efforts. But hey, they are rare food and to some, the efforts invested into catching them are worth it.

If you love this recipe, you may also like