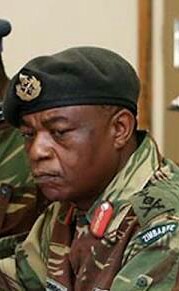 Anselem Sanyatwe, currently Zimbabwe Ambassador to Tanzania and formerly head of presidential guard has been sanctioned by the United State government and denied entry into the “God’s own” country.

Mr. Sanyatwe was directly responsible, as the head of presidential guard, for the soldiers that opened fire August 1st. 2018, on Zimbabweans protesting delay in bringing out results of presidential election. About six people were killed and several injured in the fracas.