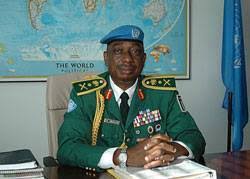 Stephane Dujarric on behalf of the United Nations Secretary General announced September 13 2019 that an Internal United Nations Board of Inquiry has been established to probe several incidents that happened in the North-West Syria, and a Nigerian is set to head this board. The North-West Syria incidents occurred after September 17 2018 when a memorandum was signed between Russia and Turkey on the stabilization of situation in Idlib De-escalation Area.

Nigeria’s connection and the need for the expertise of its national is yet unknown, however.

The Board of Inquiry will start work September 30 2019 and will be headed by Lt. Gen. Chikadibia Obiakor of Nigeria. Other members are Ms. Janet Lim from Singapore and Ms. Marta Santos Pais from Portugal. There are also two experts that will work with them, namely; Mr. Pierre Ryter from Switzerland and Major General Fernando Ordonez from Peru.

General Obiakor retired from Nigeria Army 2011 and has continually been given international appointments.

Consider these 6 Points Before Quitting!