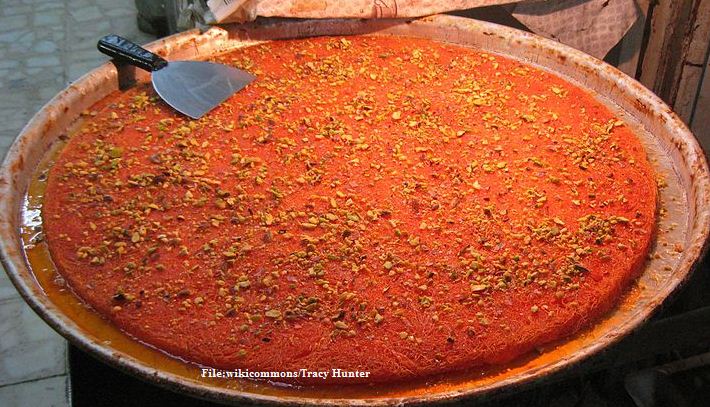 Kanafeh recipe, a.k.a knafeh, is a traditional Egyptian dessert that is popular during Ramadan. Its taste makes it a special dish for special holidays and events.

It has a sweet, crispy, and buttery taste that leaves you craving for more. Orange blossom water, sugar, and cheese add a twist giving it a heavenly flavor.

The treat features different shapes, which gives you the freedom to unleash your creativity. Just like most recipes, knafeh has a history. And below is how the modern variation evolved.

Kanafeh recipe was first prepared by doctors for caliphs who were hungry during Ramadan. The same happened in Fatimid, Egypt.

As early as the 10th century, the recipe was documented with Fatimid roots. Looking at the modern kanafeh, it is evident that the dish has evolved.

During the 13th century, people cooked Knafeh with a thin batter. Preparations were done on a “mirror” (the tābaq) or a flat Indian sheet. The dessert was enjoyed with layered honey, rose syrup, and cheese.

Later in the 15th century, another recipe variation emerged, which resembles the modern knife. Additional ingredients including honey, rose water, butter, sugar, nuts, and sweetened cheese gives it some flare.

The special recipe became popular globally and is one of the most celebrated desserts by Muslims during the month of Ramadan.

Knowing how to prepare this classic recipe will lighten up your day and leave an incredible experience for your guests.

And here is how to go about it.

4 Irresistible Sweet Potato Recipes That You Can’t Go Wrong With...