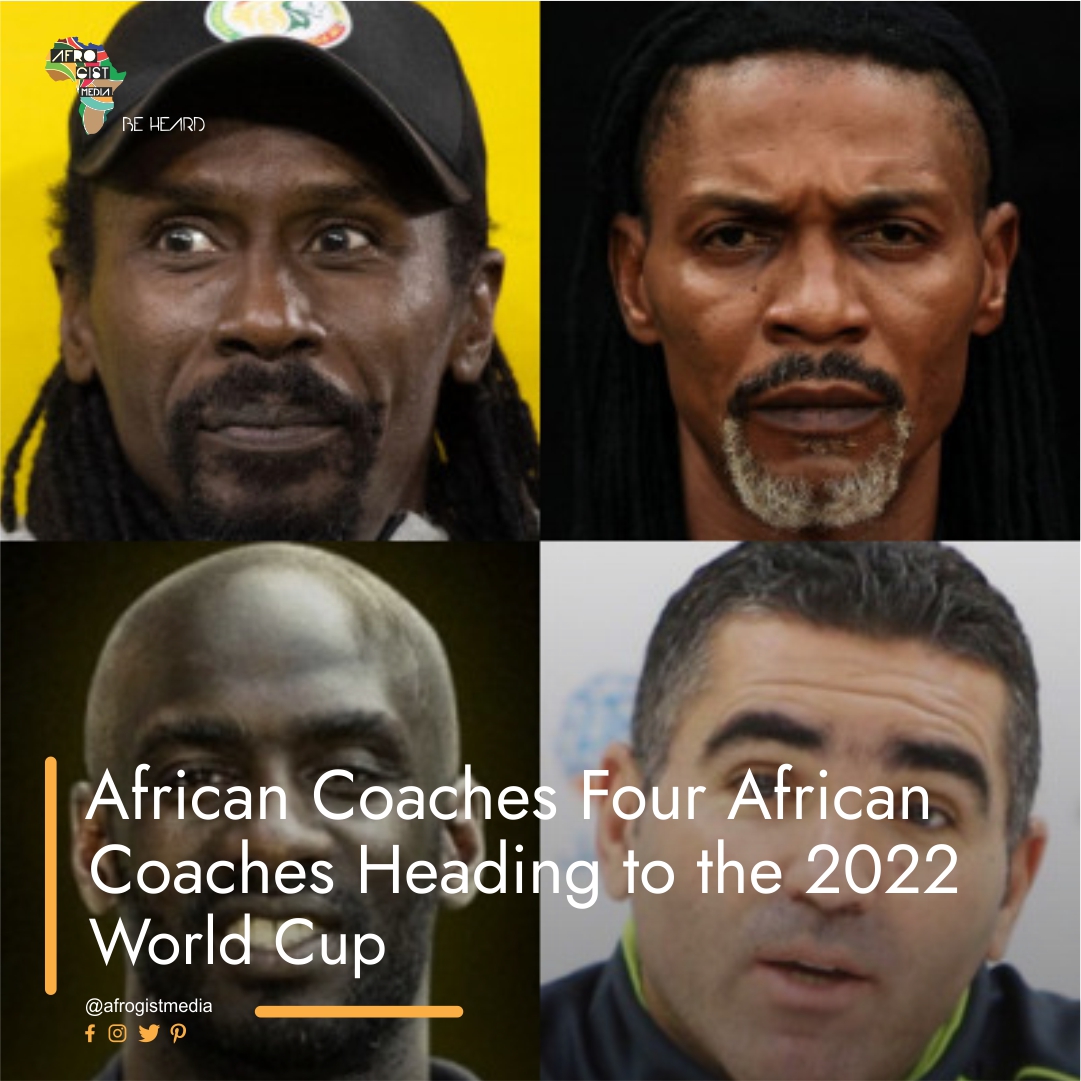 African coaches took the spotlight in the recently concluded African world cup qualifiers. Africa will be represented by five countries at the 2022 world cup, set to be played in Qatar. Cameroon, Morocco, Ghana, Senegal, and Tunisia booked a spot at the world’s most coveted tournament.

The following African coaches; Aliou Cisse, Otto Ado, Rigobert Song, and Jalel Kadri were impressive. It is worth celebrating and highlighting their leadership and instrumental influence in guiding their respective countries to the 2022 world cup. Morocco’s coach is the only non-African coach, who successfully took his team to the world cup. Vahid Halilhodžić, from Bosnia, managed Morocco in their 4-1 win against DR Congo.

Let’s review the profiles of all the African coaches and commend them for a job well done.

Aliou Cisse is the manager for the national team of Senegal, formerly known as the Lions of Teranga. Before taking upon his managerial duties, Cisse played for the national team. Professionally, Aliou played at the top of his career at Paris Saint-German (PSG), Montpellier, Bolton Wanderers, and Nimes. He lost at the AFCON finals in 2002 by missing a decisive penalty, denying Senegal the much-awaited trophy. He has since redeemed himself recently when he won the AFCON trophy with the national tea, by this time as a manager.

Aliou Cisse’s dedication, commitment, and never-giving-up mentality have catapulted Senegal to a higher level of football. This elevation has been witnessed within the continent and now with the 2022 world cup qualification. Despite receiving a lot of criticism, from football lovers and fans of Senegal, Cisse kept his head down. His hard work and discipline evident from his players have finally paid off. Aliou Cisse will be no doubt one of the African coaches to watch during the 2022 world cup tournament in Qatar.

Otto Ado is the interim manager of the Ghanian national team. He was recently appointed in February after a surprisingly first-round elimination of Ghana from the AFCON 2021. Before his appointment, Ado was the talent coach for Borussia Dortmund in Germany. Professionally at the club level, Otto Ado played for Hamburg, Hannover, Borussia Dortmund, Mainz 05, and Hamburger SV in Germany. Internationally, Ado played for Ghana.

Instilling confidence once again both in the dressing room and in the field, Ado delivered incredible results, edging out Nigeria by away goal rule. The win against Nigeria, enable Ghana to qualify for the 2022 world cup tournament. The last time Ghana played in the world cup was in 2014, so this is a no-mean fete by Ado.

Interesting to Read: AFCON 2021: A Rundown and Review of the Semi-Finals

Song is a former Cameroonian player, who played at the club level for the following clubs in Europe; Liverpool, Galatasary, Westham, Koln, Lens among others. After he was appointed the head coach for the national team, he was tasked with ensuring the team’s qualifications for the 2022 world cup.

Cameroon pulled off a late-minute goal at extra time, to end the game with an aggregate of 2-2. Cameroon qualified on the away goal rule. Rigobert Song was a decorated defensive midfielder and right-back during his playing days. It will be intriguing to watch, how far he can go with the Indomitable Lions at the 2022 world cup.

When Tunisia’s coach during the AFCON 2021 contracted Covid-19, Jalel stepped up to guide Tunisia to the quarter-finals. After being eliminated from the tournament, Jalel Kadri was named the official national team coach, replacing Kebaier. Jalel brings tons of experience to the national team. He is an experienced coach with more than 10 years experience of in professional coaching.

Based on their play against Mali, it is evident that Tunisia is not the underdogs. They are bringing in a great quality of football, which will be interesting to watch at the 2022 world cup.