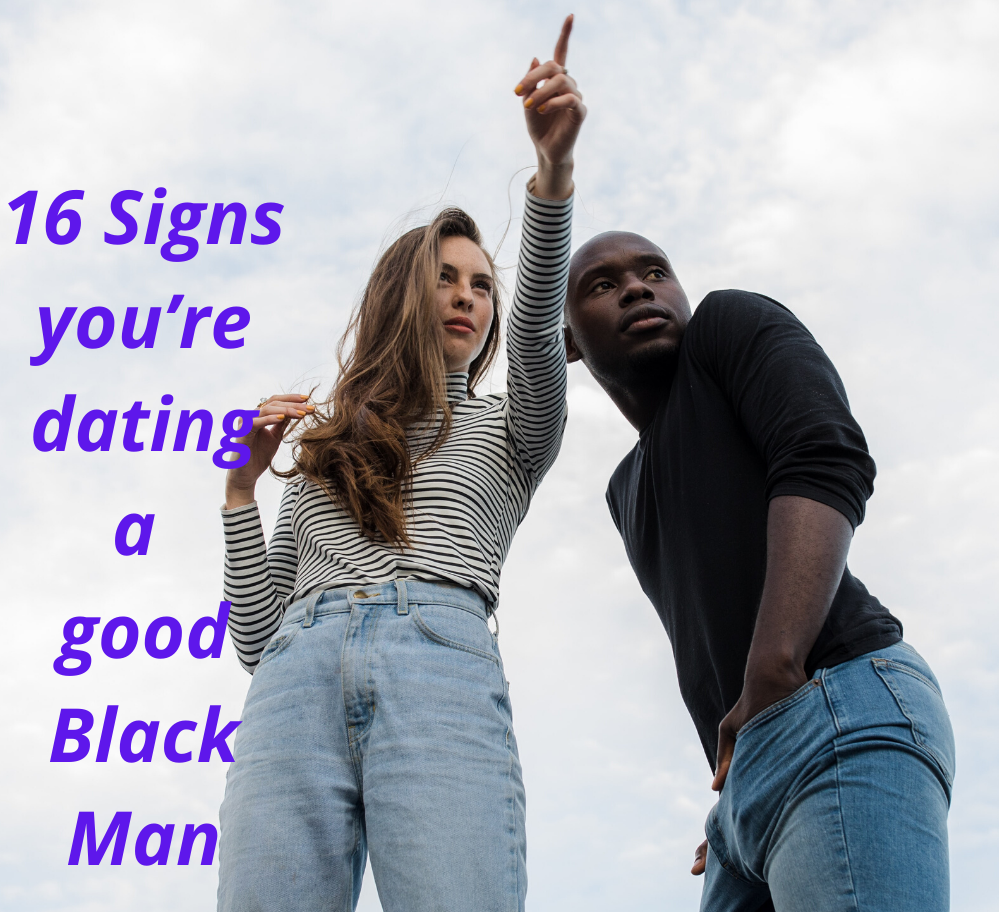 If you have been on the dating arena, chances are you’ve come across the infamous phrase ‘all men are dogs.’ Well, just because you crossed paths with an emotionally immature and toxic man does not mean that they’re all alike. Good black men still exists and chivalry is not dead.

Good black men, like heavenly sex, can be hard to find. For sure, at the beginning all men look the same, loving, caring, romantic and et cetera. As soon as you hit the first bump on the road, many ladies often get a stab on the back. The nice man’s exterior sheds off to a true raw skin and bones. Well, that’s the difference between a good black man and those womanizers out there.

As an animal that has undergone untold abuse, nowadays it’s hard to trust when someone good comes along. The 21st century lady is quick to bite any hand that tries to touch and shut any mouth that tries to vibe them. We have depleted all the faith in humanity. However, amid all this, a prince charming still exists for every one of us out there. Efforts to dig deep to cross paths with a good black man are worth every try. Good things don’t come easy, and if you are somehow lucky that they do, you need good efforts to keep them.

This goes out to all ladies seeing, dating or even thinking about a black man, here are 15 signs that he is worth your time and not just another wolf in sheep’s clothing.

A good black man manifests feelings of your inside and outside beauty. It’s not just about saying the words, the way he interacts with you mentally and physically speaks volumes.

A good man is interested in knowing more than just the inside you. He wants to know all of you. A good man probes and asks for more. He asks questions generated from real talks, not the contrived ones that he knows will make you comfortable enough to open up your legs.

A good black man possesses an unshakable character. He is inspirational in not only his words but also in deeds. He inspires you to become a better version of yourself. He doesn’t feel insecure in uplifting a lady.

More than ladies, men are also careful not to quickly jump ships. A mention of relationship and family can easily scare the hell out of them and send them back. However, a good black man is never shaken by this. On the contrary, he wants to know more about your family. He isn’t put off by your flaws. He isn’t afraid of sharing about his family as well.

Truth be told, it’s hard to have someone who gets you and who gives you that profound, calm feeling and sense of safety. If you find a black man that gives you that ‘safe place’ ; that heavenly comfort – no matter the havoc of this life, count yourself lucky for such are a rare gem.

A good man will ensure they feel comfortable around him. He will always strive to be in great times with people who you care about.

Probably you’ve come across the fallacy that black men are abusive. Well, generalizing and stereotyping isn’t my thing. However, no action of yours should ever justify any kind of abusive behavior. Be it emotionally or physically, a good black man must never be abusive to you in any way. He’s the type that will remove himself from the scene and let things cool off, and if you are constantly the belligerent partner, he’s equally wise enough to call your relationship a quit and move on. A good black man will not let a savage woman turn him into a monster.

A good black man always challenges you and pushes you to higher heights. He excites you more than you do. He knows how to get the hell out of you and throw it back. Obviously, he has a profound ability to clean the mess when he goes overboard.

It may be easier to believe, just as it’s easy said. But, a good black man doesn’t evade misunderstandings with simple wordplay. He doesn’t turn his back on your pains and aches. He’s able to know when things are not alright with you. A good black man is able to see through the horrible pretence of ‘I’m okay.’

With a good black man, the world is not all about him, his wish is to make it better. He respects the life you lived before he came your way. His aim is not to take you from it, but to help you own it. Your job, hobbies and career don’t intimidate him. He’s simply the best thing to come into the center of your life.

Men listening skills are not innate, they are learned. For ladies, a man who listens to women attentively is sexier than a six pack. A good black man listens with his heart, he gets quiet and maintains a eye contact, he doesn’t always jump to advice-giving.

When you say ‘I’ll be meeting a friend tonight,’ she says ‘You’ll be missed, but I’m okay since you’ll take care.’ Insecurity and egos apply, but they don’t hinder him from being honest. He won’t avenge and go passive-aggressive or immature on you by organizing a date the next day. Such a man is a unicorn, don’t let him go.

He doesn’t give himself all the credit no matter how intelligent he is. He is always seeking self-improvement, either through taking extra responsibilities, learning a new thing, or getting a better shape, getting healthier and staying fit. He always seeks self-improvement not to impress you or boast to others, but because he knows that self- improvement is good and needed.

Generally, it’s hard for men to express their inner fears, emotions and desires. Having a good woman opens door for such kind of expressions. A good black man won’t hide his feelings because he knows that that could cause tension in your relationship.

16. His position on Black Lives Matter is balanced

With growing police brutality, racial profiling, and gross social injustice directed at Black men specifically, and people of color in general, it’s hard gauging where many Black men are on a mental-social context these days. But definitely watch out for aloofness and extremity. Is he completely withdrawn, have zero opinions about these large social issues that affect him as a Black man? Or is he on the extreme who can’t put a constructive argument together on what’s going on, but quicker to join those protesters who integrated looting into their rebellion campaigns? Ultimately you’ll be the judge in this, but both signs mentioned here could foretell how he manages both personal and professional crises.

In the words of Vince Lomardi, Perfection is not attainable, but if we chase perfection we can catch excellence. In our context, there is no perfect man. However, there are plenty of good men out there. Any man can be with you during the sunny days, but, will he hold the umbrella for you during the rainy days? Finally, remember that like attracts like. You want a good man, be better yourself. When you embody all that you like in a good black man, he may still be hard to find, but he might spot you first.

5 Ways To Help Immigrant Children Affected By The Border Crisis