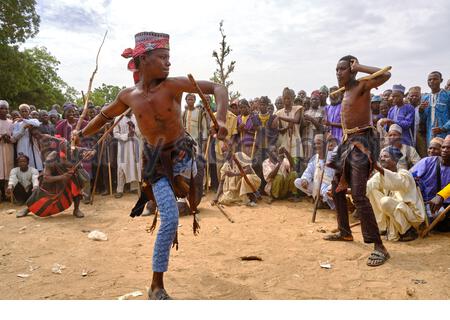 One Disturbing African Marriage Rites That will Shock You

Marriage is a social institution that is practiced all over the world. Although its core practices vary across all societies and cultures. The institution of marriage is mostly recognized for what it or what it should be. In Africa, marriage rites are unique practices that are performed during marriage ceremonies, and they are often a big deal.

For some ethnic tribe like Fulani, Sharo festival is a marriage rite, and its ceremony is taken to a scary height that could make a gen Z forgo marriage altogether. These practices, no matter how strange or disturbing to the 21st century digital natives, it is still on till present day.

Did you know that getting flogged and enduring the pain could get a Fulani young man a wife instantly? Yes, it’s actually so, and this practice has been on for centuries. Sharo actually means “flogging” in Fulani dialect (fulfude). Fulani is an ethnic group that inhabits some West African countries like Nigeria, Niger, Mali, and Senegal. Sharo Festival takes place twice in a year. The first festival is usually held during the dry season when guinea corn is harvested, while the second festival is usually held during the Muslim festival-Id-el-Kabir. The festival could be a week long event.

The Procedure of Sharo Festival

Prior to the actual flogging, the potential suitors would be bare-chested, and would be ushered into the center of the stage by maiden dancers. There would be songs and several chanting too. There is always a referee that will ensuring a few to no casualty at all. The rule of Sharo is never to flog any of the contenders on their head. Also, the length of the stick should be between 4-6 feet, and the thickness should be 1 inch in diameter. The participant being flogged will raise his hands up and hold his stick in the air. This is to be better positioned for flogging. The marriage rite is held in open space such as market square, and it is attended by dignitaries. Music and chants of praises usually accompany the event.

The potential suitors will begin by flogging each other, and they must not show any sign of pain. Rather, those being flogged will request for more and violent strokes by inciting the other participants to flog them the more. The event is not always rowdy as flogging is turn-by-turn basis. This is because the strongest and the bravest of them all would win one or two maidens’ hand in marriage at that very spot.

The winner of the contest is usually declared by the referee or any available Fulani leader present. It is always a shameful event if a Fulani young man show a sign of weakness during Sharo festival. This could be embarrassing to his families and friends who would be present at the festival.

Can a man endure so much pain and suffering just to win a maiden’s hand in marriage?

In the case of Sharo, some of the participants are seen chanting some incantations and wearing amulets, a diabolic means of fortifying themselves from feeling the pain of the flogging. Some might have done this traditional fortification before the actual day of the festival by drinking concoctions and other ritually prepared potion. One can therefore argue that the winner of this marriage contest is neither about mutual love, nor actually about the strongest or the bravest, as made to believe, but the one that traditionally fortifies himself the most. In the end, it may all come down to the battle of the wizards -that is beneath the surface.

You may also like: Hey you! Marriage is not for you | Don’t fall into the ‘trap’

Is there a room for improvement to avoid casualties?

Although the referee is always there while the contenders flog each other, sometimes there are casualties that could lead to blindness or even death. I just feel there is a need for the participants to start wearing protective helmets to protect their head and other sensitive parts of the body. This will prevent needless casualties. Even after the festival, both physical scar and the emotional baggage will still be there both for the winner and the losers. The scars signify bravery in Sharo’s courage and endurance of the Fulani man. So, don’t be shocked to see such scars if you come across a bare-chested Fulani man. Those may be the price he paid to get his women!​

How new immigrants can relocate to NYC and Land their First...