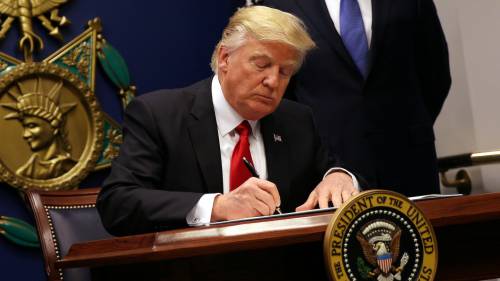 Last week  in the court with Judge Chin, President Trump’s lawyer, William Consovoy  put his client, Trump, above the law stating affirmatively that as a sitting president, if he shoots someone -anyone at all – on 5th Avenue, he cannot be arrested or prosecuted while he’s still a president.

NYC Mayor De Blasio debunked Consovoy’s assertion stating that  if Trump pulls that off in NYC, he’d be arrested. So legally who  is right? Is this just a roast exchange; a soft flex of power?

“If anybody shoots someone, they get arrested. I don’t care if it’s the president of the United States or anybody else. If you shoot someone, you should get arrested and we would arrest him.

The answer is a bit complicated.

According to the United States constitution, a sitting president is constitutionally immuned, and can’t be criminally indicted since this will prevent that president from doing their job.  Yet, the same US constitution rules that nobody is above the law.

If Trump were to murder someone cold-blooded on 5th Avenue while still the president, the most De Blasio’s prosecutors could do is to invite him for series of frustrating questioning. Constitutionally, he cannot be handcuffed like any other. To get that handcuff tighter on his wrist for a murder crime, he must first be impeached.

Many legal thinkers have argued that there could be an exception to the presidential immunity if a sitting president’s crime is just too egregious, however, there is yet a precedent for this in the United States legal history. New York City, of course, could set this precedent if the hypothetical scenario were to occur, but it’ll be a tough one. The result could also challenge most values that are fundamental and that you appreciate about the constitution.

The United States constitution is harder to change, and it’s rather much easier to put efforts into carefully selecting who ascends to its highest office.