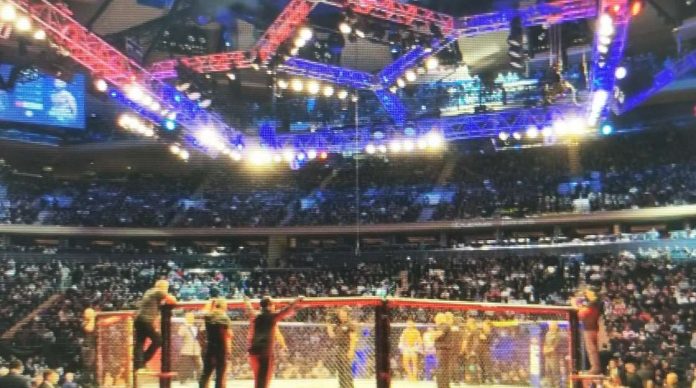 President Donald Trump was at the Big Apple last night. Relax, he was not at 5th Avenue, and please worry not, because real or hypothetically speaking, there was no murder.

He was at the Ultimate Fighting Championship 244 (UFC 244 ) on Madison Square Garden where he took the spotlights away from the champs and centered them all at himself. Some people knew before hand that he was to attend as we saw several protesters and supporters gathered around the Square with their placards.

Some, and perhaps many who already went in to watch the fight clearly didn’t know, however, that Trump was scheduled to watch with them which explained why their reactions were out of control.

There were resounding boos and cheers, but the boos overcame the cheers for sure.

According the the report, the UFC had invited Trump as they marked its 500th live event in history. Trump’s invitation was to honor him for having been “a backer from early on,” but people are also smart enough to sense that appearances like last night for Trump is political.

Politics or not, some aren’t simply comfortable watching their games or “chilling” with Trump . Period.

As per the actual and highly anticipated “show” people wanted to see – Jorge Masvida won, and Nate Diaz lost with evidence of several hard punches from Masvida.

Black Brothers Show Love Differently. Here are 5 Definite Signs that Your Boyfriend is Serious about You

Work From Home Tips And Best Practices: How To Work Remotely Without Losing Your Mind

How To Find Jobs After Layoffs

An Alternative Perspective on Covid-19 that the Mainstream Media is Surprisingly...