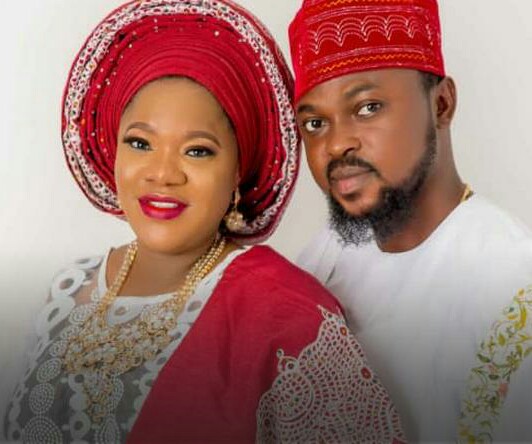 Bukky Wright, one of the leading Nigerian Film Actress introduced Toyin Abraham to the film industry in 2003 when she was at Ibadan shooting a film and she gave Toyin Abraham a role that was performed to the amazement of Bukky Wright. From then on, Toyin Abraham moved up as an Actress. She has also advanced in the field; she produced and direct films.
Born on September 5 1984 in Auchi, Edo State, Nigeria, she went through The Polytechnic, Ibadan where she graduated with Higher National Diploma in Marketing.
Toyin was married to Adeniyi Johnson, a Nollywood Actor in 2013. However, the marriage did not last long as Toyin Abraham accused her husband of infidelity. The irreconcilable differences between the duo prompted Toyin to move out of her matrimonial home.
She had other romances that did not yield any positive results until she met her current heartthrob Kolawole Ajeyemi. They tied the knots July 4th 2019 albeit secretly, but later became public knowledge.
Kola Ajeyemi otherwise known as”Awilo” in the Yoruba film section of Nollywood, started his acting career 1997 in Abeokuta with Segun Ogungbe, son of the legendary Yoruba Actor Ogungbe.
The marriage has produced a baby boy. Has Toyin found her match?