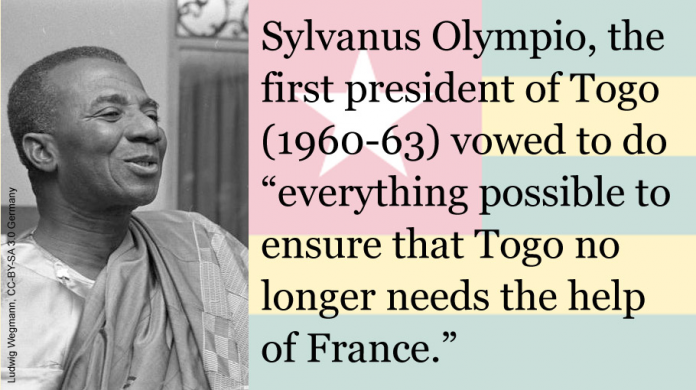 From 1958 until his assassination, Sylvanus Épiphanio Olympio was a Togolese politician. He also served as prime minister and later as the president of Togo. The French government treated Olympio with a lot of hostility during the transition to independence. They were concerned that Olympio would dump them and advocate for British interests after Independence. Olympio was assassinated by the French military in Lome, Togo, on 3 January 1963 Togolese coup d’état. The body of Olympio was discovered three feet from the door to the US Embassy by US Ambassador Leon B. Poullada. The assassination of Olympio was through military coup, being the first of its kind in African.

Around 1997, Zaire needed a savior from the dictatorial Mobutu Sese Seko. Thereafter Laurent Kabila emerged, first as a rebel leader. He had a decent background in business but dropped that for guns. He eventually became the ‘Hitler” in the first Congo war. Kabila was the president of DR Congo who overthrew the world-renowned dictator, Mobutu Sese Seko. The assassination of Kabila carried out on January 18, 2001. Unfortunately, he was only 61 years old. After ousting the Mobutu regime, Kabila began genuine reforms. He even changed the country’s name from Zaire to DR Congo within a few days.

President Juvenal, nicknamed “Invincible,” was Rwanda’s second president. The assassination of Juvenal carried on April 6, 1994. He was just 57 years old, and described as tyrant. This could be as a result of his several unopposed ‘rigged’ re-elections. Eventually, President Juvenal was shot down by a missile. He was in company of the President of Burundi, Cyprien Ntaryamira. The incident happened was near Kigali, Rwanda. The assassination of President Juvenal sparked ethnic tensions in the region and contributed to the genocide in Rwanda. It is the worst in the history of Rwanda and France was rumored to be complacency in the genocide.

President Anwar Sadat was the third president of Egypt. Anwar’s assassination was carried out on October 6, 1981. This was as a result of the peace agreement he had with Israel. He was only 62 years old. Anwar was a man with great oratory abilities, style, and “swag.” Even when the political costs were high, Anwar was a significant risk-taker. In 1981, a group of dissatisfied military officers killed Anwar in a military parade. The peace agreement was not cool with the Arab World and the larger Muslim World.

You may also like: 9 Facts On Why Black People Don’t Have Money

President Cyprien served as president of Burundi from 5 February, 1994 until his death. The assassination of Cyprien happened on 6 April, 1994, when he was just 39 years old. Unfortunately, the tenure of Cyprien was marred with tension. He was chosen to bring calmness. However, he only occupied the office for just six months.  President Cyprien died after his plane was shot down while landing in Kigali, Rwanda. He was with a friend, the president of Rwanda, Juvénal Habyarimana.

President Samuel Doe was the President of Liberia. Doe’s assassination occurred on September 9, 1990. He was just 39 years old. Until Doe took over through a military coup, Americano-Liberia dominated the Liberian politics for a century. Doe opened Liberia to Canadians, Chinese, and Europeans, resulting in significant investment in the country. In the late 1980s, the US government became dissatisfied with Doe’s government. Critical foreign aids were reduced to punish the Doe administration. President Doe was apprehended, tortured, and executed.

Marien Ngouabi served as the president of the Republic of Congo. He was only 38 years old until his assassination on March 18, 1977. Marien changed the country’s name from Congo to the People’s Republic of Congo. He also declared it as the first Africa’s Marxist state. Marien was under pressure from the French to annex the then oil-rich Cabina, a part of Portuguese Angola. His refusal to act made him lose the support of the French.

President Gaddafi was the president of Libya. Like several African leaders in the 1960s, Gaddafi took power in a coup from the monarchy of King Idris. In 2011 an anti-Gaddafi uprising emerged, resulting in a Civil War. Eventually, the U.S and rebels brought down the Gaddafi government.

The Democratic Republic of Congo was founded in 1960, and Patrice Lumumba was the prime minister. Unfortunately, he left the office after just three months. The assassination of Patrice was carried out on 17 January, 1961. He was only 34 years old. During the Congo crisis, when Lumumba couldn’t get the support of the UN and the USA, he turned to the Soviet Union. The Katangan authorities ordered a firing squad to execute him. Eventually, Patrice was regarded as a martyr for the Pan-African cause. Belgium officially apologized for its role in the assassination in 2002.

As one of the African presidents, Thomas Sankara of Burkina Faso was assassinated on 15 October, 1987. He died at the age of 37. Sankara developed Burkina Faso into a symbol of economic revolution and an icon to many African’s eyes. Sankara was booted out of office through coup which characterizes military African presidents. The coup was hatched by Sankara’s former colleague, Blaise Compaoré. The coup was rumored to be supported by France to end the government of Sankara. Eventually, Sankara was caught and assassinated. However, he won the hearts of many, because of his betrayal by his best friend .

An Igbo proverb says that the enemies from outside will not find their way to a man without enemies from within. It is high time Africans and African presidents stay united and take the spirit of revolutionaries by making Africa a better place.