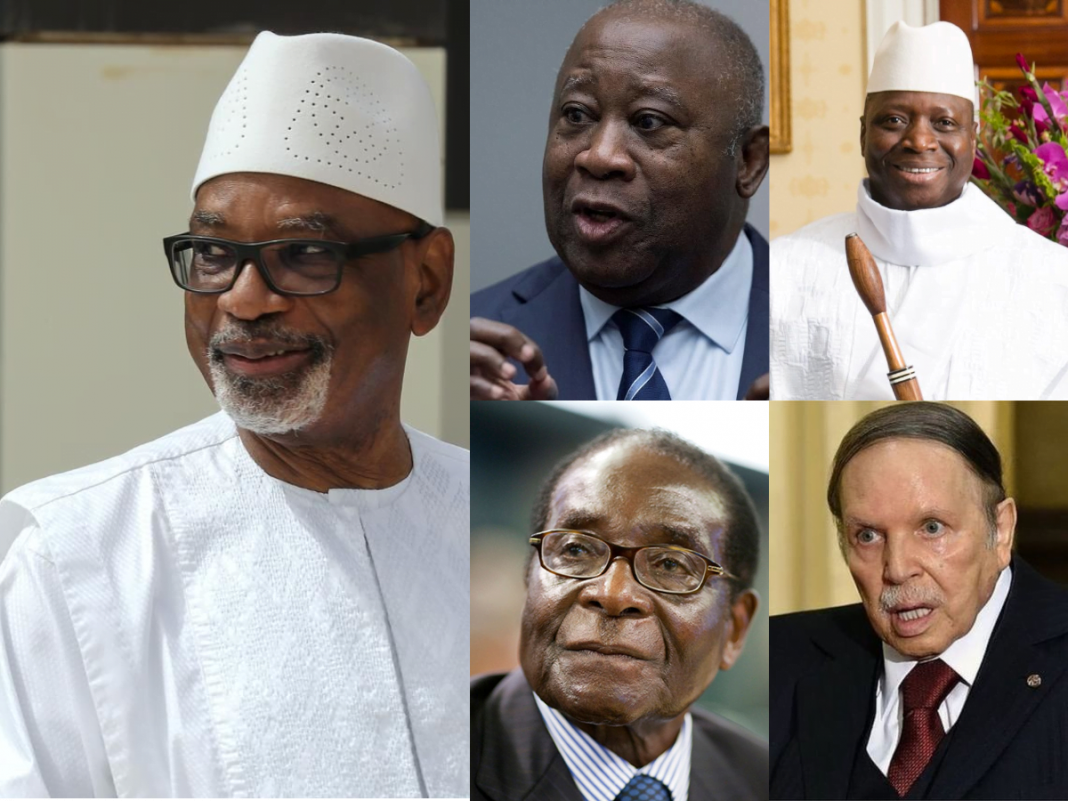 Blame everything on African leaders if you care, but not all of them are bad. As in every part of the world, Africa has both good and bad leaders. A typical African leader aims at sticking to power even if it means changing the constitution or using other means necessary. The thoughts on why they are predisposed to this mindset is beyond the scope of this post, and I’ll reserve it for another post. All the same, in their secret places, there are certain humanitarian sins, moral flaws, and gross spiritual violations that many of them will admit to. Let’s take a look at the 6 grievous mistakes that African leaders will secretly admit.

1. Grievous Mistake One is: Clinging to power

Photo credit: Swala Nyeti Museveni President of Uganda being sworn in for his sixth term

African leaders choose power over the people. Africa has some of the oldest and longest serving leaders in the World. To put this into clear lime-light perspective, someone who was born in Equatorial Guinea in 1980 is currently 40 years old, and has only known one president, meanwhile a person of the same age in the U.S.A has known eight Presidents. For someone born in France, there are 6 presidents within the same period.

Africa’s oldest President and the world’s second oldest President, Paul Biya is another good example who his people claimed has manipulated the constitution and rigged elections several times in his favor. In the public, you’ll encounter him as someone who thinks he knows what he is doing, but deep down, he is afraid.

The people of Cameroon have given up on his ouster and are waiting for nature to take its course, that is “Death,” a natural phenomenon against which man is forever powerless. Let’s not even talk about President Teodoro Obiang Nguema who has his son as the Vice President of the nation, and another son as the Minister of Mines. Teodoro is the world’s longest serving President.

The idea of clinging to power may be defended as just, but it remains one of the grievous mistakes. The idea stems from a mindset of entitlement, and not necessarily a longing to protect the motherland. If this is the case, then fine. But we also know that in history great kings are warriors; they are heroes of the people who willingly would choose to die for the greater good of their subjects. Leadership is a call of honor that strictly demands sacrifice. A leader serves even at the expense of their own wellbeing. And for sure, left alone in his thoughtful moment, a typical African leader will admit this.

You may also like: Fashionable African Presidents: The Most Stylish Of All Time

Ever heard of Chad? Well, Chad is one of the worst and poorest countries to live in Africa. Chad is the least developed and also one of the most corrupt countries in the World. Ironically, its  late President Idriss Deby who was killed recently  in a battle was one of the richest in Africa. Wondering who is the current President of Chad? Well, the branch doesn’t fall far from the tree, Interim President of Chad is General Mahamat Idriss Deby the son of the late President. You think neither the father nor son could see this pathology? Please!

Another grievous mistake is dictatorship. To the beautiful country of Uganda in East Africa, Yoweri Museveni who was sworn in for his sixth term recently cares less about the welfare of his citizens. For many Ugandans the name Museveni is synonymous with “Presidency” since the majority of the citizens have known Museveni as their only President.

Yoweri Museveni to a stranger may appear funny and jovial because of his collection of nice hats and suits but don’t be fooled because he has been ruling Uganda with an iron fist for close to 35 years now. If they have to sue diabolic powers in combination with physical force, you sure can tell that they are inept but aren’t stupid. Museveni has practically made Uganda his private property and nobody dare question him. Museveni eliminates anyone who tries to oppose him. Uganda is among the poorest countries in Africa due to Museveni’s mismanagement of the country.

The Chinese proverb says’ “Give a man a fish, and you feed him for a day. Teach a man to fish, and you feed him for a lifetime.” African countries have been the greatest beneficiaries of foreign aid even after many years of Independence. To be honest, the U.S government  has been providing huge financial aid to African countries. Ironically, according to research, the amount of money that leaves the continent is  huge compared to the one coming in in-terms of foreign aid. This shows that Africa has the potential to generate its own revenue, but over-reliance on foreign aid makes the African leaders docile despite the human capital, endowed resources, and creativity at their disposal.

I believe strongly that no European government helps African countries for free without expecting nothing in return. There’s no free lunch, Africa! Some returns and expectations may appear as a dictate on what happens over critical domestic matters. Testing bio-weapons in Africa, testing drugs and vaccines, setting up foreign military bases in sovereign nations, and a host of other high-level negotiations and missions are all the cake substances layered with icing. You don’t bite the hand that feeds you, African leaders remain silent as this continues. Since they also easily divided in tribal disputes, a few that dare challenges the status quo is already on his way the abyss of death or irrelevance. Many African leaders know this evil, and will secretly admit the problem.

Homosexuality is a  hot topic of debate that many African leaders are shy of. The late President Mugabe of Zimbabwe once joked that even Satan was not gay and choose to approach Eve who was naked and did not approach the naked Adam.  Still, on Mugabe, he once shouted “We are not gays” at the UN assembly while giving a speech about the Europeans views against human rights. Unlike Mugabe, many African leaders choose to follow the evil deeds of the whites, for example, Akuffo Addo the current President of Ghana when being interviewed by Aljazeera revealed there were plans to legalize homosexuality in Ghana despite being against the Ghanaian culture and African culture in general. The reason being the fear of losing foreign aid. But how long will Africa remain slaves to the European countries?

6. African leaders have no vision for the continent

African leaders, especially post-independent ones  are used to blaming the European Union countries for their failures. This is not a contradiction and to exonerate the blame from countries that have manipulated Africa because of foreign aid. African leaders once elected to office strive to please their demi-gods the whites and adopt their policies some even adopt the entire constitution. Instead of laying a foundation for the success of Africa as a continent many African leaders are after their personal interests and not those of the citizens who elected them to office and work hard to pay taxes.

To many leaders in Africa once a white man is happy, they are okay and nothing else matters. Visiting most countries in Africa, the current infrastructure such as roads, railways were all master-plan of the colonialists and the pre-independence African leaders. The current generation have no vision for the continent  and many have no long-term plan document for the future even for their countries, let alone Africa as a whole. The popular mindset of those heading for power and the people backing them is clear: it is our turn to eat.

Africa is a beautiful continent with a diverse population. It’s issues are many, but its strengths are greater. Blames can keep going around on bad leadership, foreign aid, history of colonization, and more, but the point is African can only change for better and grow with the quality of the mindset of its people. But to think that African leaders in their good minds do not admit the evils that plagues the continent, let’s spit it out.

With the rising generation of Africans, there are good leaders with vision who will one day stop asking to be given a chance to fix things; instead they’ll take it. Many chances of heroes are not gotten but taken. I remain optimistic that with the phasing out of the old generation of dictators there is a chance for the women, the youth, and a good generation of leaders with vision to emerge. There is light at the end of the tunnel for sure. May this light shine brighter and brighter to the end of days.