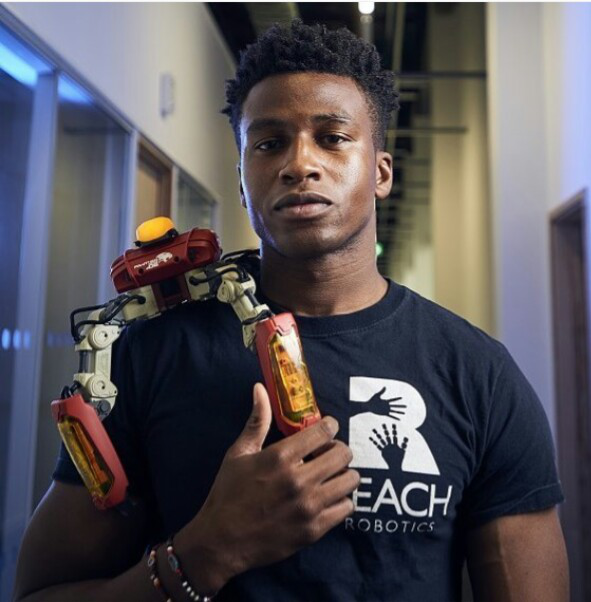 Silas Adekunle is a 26-year old Nigerian who’s credited for building the first gaming robot in the world.

The 26-year old was born in Nigeria where he completed his secondary school education (high school) before relocating to the United Kingdom with his family.

In the United Kingdom, he studied Robotics in the University of the West of England. He graduated with a first class degree from the university and proceeded to establish Reach Robotics, a technology company.

The company was founded in 2013, and it’s aimed at integrating augmented reality with gaming to perform functions in the real world.

Silas has been a team leader of robotics in schools programme, and he has helped shape the lives of young technologists via a programme which encourages students in the Science, Technology, Engineering, and Mathematics (STEM) programme.

By helping other students, Silas improved on his skills and eventually launched MekaMon, the world’s first gaming robots.

MekaMon was launched in 2017, and it’s designed in such a way that the user can customize the robot to perform personal functions.

As of this time, the MekaMon robot generated several skepticisms. However, 500 bots of the robot were sold, generating $7.5 million in the first launch.

Following the success of the first launch, Silas received support and formed a partnership with organizations like the London Ventures Partners who invested $10 million into his project.

What’s more, Reach Robotic signed a massive deal with Apple. Right now, his robots can be found in most stores in Britain and the United States.

In an interview with Forbes, Silas explained how his robots would inspire children to develop an interest in STEM, and also work towards their tech dreams.

Other African Youths You Should Know

This year, a group of young Nigerian girls surprised the world by winning the 2018 Technovation World Pitch Summit.

Team Save A Soul developed the FD-Detector, a mobile app that’s designed to tackle the issue of fake pharmaceutical products.

The team is driven by the goal to save lives with the use of technology. In Nigeria, thousands of babies are killed because of fake drugs.

Team Save A Soul will partner with the National drug agency in Nigeria to combat the problems of fake pharmaceutical products.

Thousands of African youths like Silas Adekunle and Team Save A Soul have been sending the right message to the international community.

For Africa to move in the right direction, stories of strong African needs to be told. By spreading the right messages, other African youths will be encouraged to unleash the latent potential within them.

Furthermore, these young Africans will serve as an inspiration to other young Africa youths who are working to build their dream life.