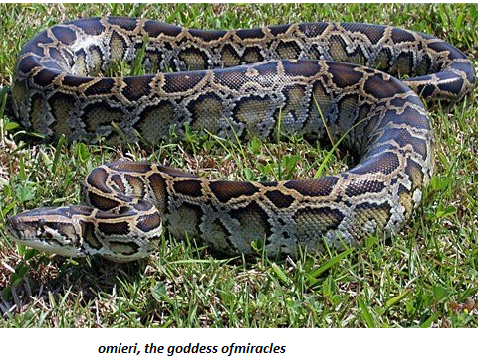 Omieri, the Goddess of Miracles

Kenya rejoices as Omieri the cryptic python returns to Kisumu. Omieri is a legendary python which is believed to be the goddess of wonders in President Obamas father’s hometown. It was considered to be an ancestral incarnation of Omieri who died in the 19th century.

Normally, in African communities, a snake is thought to be demonic or satanic. However, this is not the case for the Luo community in Kisumu. The residents so valued snakes, and had a strong belief that snakes are a sign of good luck, great harvest or blessings. Thirty years ago, a mysterious snake which had powers was discovered.

The legendary python which was dubbed “omieri” was discovered by a couple in their farm. The snake was the first giant snake ever to be seen in the region, weighing 58kgs and 16ft long. Instead of killing it, the couple decided to feed it with chickens and goats in a mission to make it their pet.

As time went by, the snake continued to make public appears. Each time the python appeared, it used to emerge near Omieris home. The community members had speculations that Omieri who had died had raised from death in the form of a snake which saw the famous snake nicknamed ‘Omieri.’

Many traditionalists among the Luo community used to worship the python as it was believed to play a part in the well-being of the Luo community. People would travel long distances both locally and internationally to come and see this legendary snake and shower it with gifts.

Each time the snake appeared miracles would follow. The python was believed to be the goddess of bumper harvests and rain. Questions continued to popup peoples mind about Omieri. Differences arose which saw the region and the nation differ on ideological and spiritual grounds. Some residents particularly those of religious faith ordered for the python to be killed but traditionalists would not allow it.

In 1987, grief filled the whole community when the snake died as a result of inflicted burns caused by wildfire. The snake was preserved in the National Museum and plans to return it home are underway. Residents expressed their joy after a five-day cultural event organized by (UNESCO) United Nations Educational Scientific and cultural organization to bring the snake back home for public viewing. The cultural event is set to bring together all the 47 counties to showcase their culture.

Even though Omieri died, residents believe that the python was not just an ordinary snake and its return back home will bring blessings and miracles to the community. Preparations for the cultural event are underway and are set to take place at the Jomo Kenyatta Sports Ground between the 19th and 23rd September 2018. The president of Kenya Uhuru Muigai Kenyatta will officially open the celebrations. Traditional leaders will hold a traditional ceremony to celebrate the return of the goddess of miracles.

Are snakes valued in your community?  Do you believe snakes have powers? Feel free to share your comments.

5 Sumptuous North African Dishes you Should Try Out