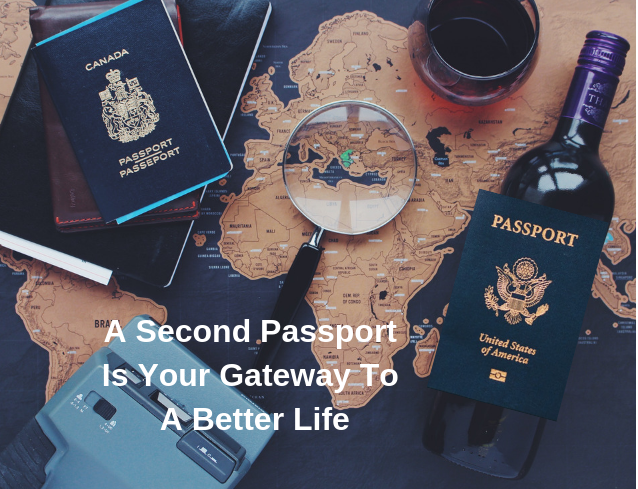 What’s better is attaining the citizenship status of a foreign land.

Here’s the thing — with a second (or third) passport, you’d be free to explore the world, and your success will not be limited to specific government policy.

Humans are created as freewill creatures — part of it is being able to travel and live in an environment of your choice.

If you’re an African, you’re probably left with no choice.

Because if you want global relevance and to be able to provide a better life for you and your loved ones, then your only shot is to travel out.

Here’s the thing — if you only have one passport (your homeland passport), then you’d not accomplish much in your lifetime.

Every great man is a fantastic traveler!

The benefit of getting a second (or third) passport is countless.

Having just one citizenship is good, but you’re pretty much limited in ways you may not know.

As a citizen of the world, you deserve a better life. And to build your dream life, you’ve got to go and live where you’re treated best.

Enough said. Here are the fastest ways of getting your second (or third) passport.

If you’re able to trace your ancestry to a foreign land like Europe, you’d be qualified for a passport.

Citizenship by descent is an inexpensive and fast process. And in most cases, your passport would be delivered to you within six months to two years.

If you’ve got a significant investment to make, a passport would be granted to you in no time although the policies for citizenship by investment varies from one country to another.

Therefore, before going ahead with your investment, you’ve got to be sure of the legal implications and the various systems in place.

However, if you’re in it for the long run, you should be planning of investing at least $1 million for a decent passport.

As stated earlier, every nation has peculiar requirements, and you’ve got to look out for it.

If you’ve tied the knot with a foreign national, you can quickly get the citizenship of that nation.

Here’s the thing — as a foreign spouse, you’d be granted instant citizenship by some nations, while other countries have an explicit requirement you’d have to fulfill before getting your citizenship.

For countries with requirements, the time is usually shortened, and the process is pretty much straightforward. Also, you may have to undergo a language test.

Countries like Qatar, Singapore, Poland, and Albania offer instant citizenship to an exceptional artist, athletes, or individuals who have contributed significantly to a field of study.

Furthermore,  people who invest heavily in a country may be considered for special treatment.

Whether you’ve got ancestral ties with a nation, an investment, or you’re married to a foreign national; you can use it as an avenue of getting a second passport.

In the next post on this series, you’ll discover the list of countries where you can attain the citizenship status fast without any limitations.