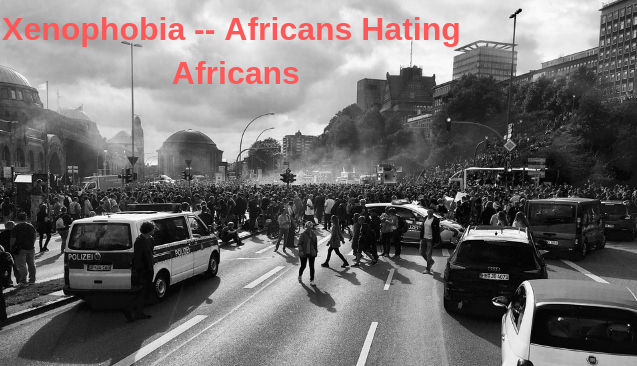 Xenophobia has been one of the leading causes of violence in Africa. It’s because of fear, envy, and a feeling of insecurity among citizens of a country.

When the native landowners see foreigners as threats and people who should be eliminated, then there’s a problem.

This feeling of hatred and anger would transform into violence.  And in no time, there would be riots and a series of violence across the nation.

Africa has witnessed xenophobic violence. In Africa, the surprising thing is how Africans assume that their fellow African brothers are the threat. And they should be dealt with and eliminated.

Countries like South Africa, Zimbabwe, Ghana, and Nigeria has been through a series of violent periods in their history.

Today, South Africa seems to be the leading in the hatred towards other Africans in their country.

When the citizens believe that the government doesn’t have what it takes to curb the situation, they will take laws into their hands.

Here’s the thing, people are born with a certain level of insecurity, and a slight alteration can heighten this insecurity in their way of life.

Therefore, when there is massive in-flock of foreigners into their homeland, or foreigners are breeding quickly and multiplying faster than the native landowners, the landowners would feel insecure which will lead to unjustifiable fear — xenophobia.

Some major causes of xenophobia include:

Abuse of the rule by foreigners

In 2016, some Fulani herdsmen launched an attack on Ghanaians on their soil. Aside from the regular attacks by the Fulani herders, they also indulge in the intentional destruction of farmlands and crops.

These actions led to the Xenophobic attacks on Fulanis by Ghanaians.

When the rule of the land is abused, trouble follows. And the resulting violence would be hurtful to the parties involved.

Employment issues and other societal challenges

Employment has always been one of the major concerns of the populace. There are hungry mouths to feed, and good jobs are the only ways to put food on the table.

Landowners feel threatened when foreigners migrate into their country solely for employment benefits.

The citizens would see the foreigners as competition — and they should be dealt with.

Violence, protest, and anything else would be done to drive out non-citizens.

On the flip side, native landowners do not revolt against foreigners who come into their nation to create jobs for the people. They welcome these foreigners with open arms. Job creators, no matter where they’re coming from are angelic beings and should be accepted into the nation.

This is seen in South Africa where immigrants are on the run because of a series of attacks launched against them by the native citizens.

In the eyes of the citizens, other African foreigners are the competition. So, they’ve got to eliminate them if they’re to keep their jobs and have a better living standard.

When the entry barrier into a nation is small, then you’ve got a problem. They would be large numbers of immigrants which would lead to clashes between the landowners and the immigrants.

Therefore, the first step would be to strengthen the migration laws and identify ways of allowing only the right people into the nation.

Better ways of protecting immigrants should be enforced. Immigrants are regular folks in a foreign land — they need adequate protection from the law enforcement agencies.

Thirdly, anyone who incites violence against immigrants should be strictly punished by the law.

To curb citizens from developing hatred towards immigrants, the law-makers should create laws with the citizens in mind. Citizens should be considered first during recruitment exercises.

Finally, when foreign investors come into the country to start-up businesses, the government should sign contract clauses which stipulates that a significant percentage of the native citizens should be hired when the new company is set up.

Life as an African is hard. But with a little tweak, we can build a better future and create the dream Africa that we all desire.

In what ways has Xenophobic attacks affected you as an African?