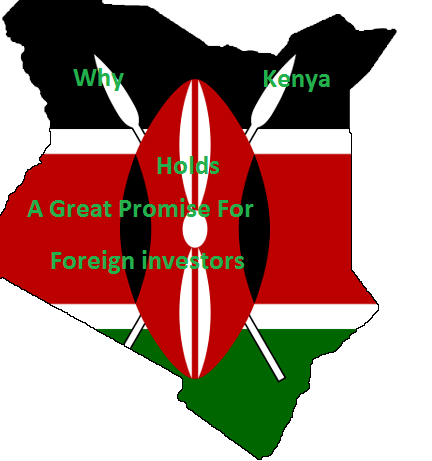 Foreign investment in Kenya has risen dramatically compared to other developing countries in Sub Saharan Africa. There are many foreign investors, many of whom come from the Great Seven countries ( France, Canada, United Kingdom, Germany, Italy, Japan, and the United States) longing to set up their investments in Kenya. Besides, China construction firms, for instance, have manifested their keen interests in working alongside Kenya and investing in the building and construction industry- real estate. Kenya has seen its major economic pools which are: information communication technology, manufacturing, health, tourism, transport logistics and infrastructure, agriculture, real estate, and trade rise with a significant margin compared to previous years.

With the light of the above information, you might wonder why Kenya, the regional power in East Africa and one of the growing economies in Sub Saharan Africa is the gold mine for foreign investors, (scholars have defined regional power to mean a state that has the skills and potential to control peace and stability in a specific region despite its capability in the global platform).

Here are seven great reasons why foreign investors should find Kenya the “hotbed” for a high return on investments.

Kenyan economy has been praised as the best dynamic and competitive economy amongst East and Central Africa. The World Bank’s vice president has complimented Kenya for enhancing and improving an environment that attracts the private sector. He also showed his commitment to enabling Kenya speed up her competitiveness and economy.

The Kenyan government has revised her industrial relations charter to showcase the national interest in creating a workable environment between her employees and employers. The charter features national cohesion and negotiation aspects in settling disputes and differences. Investment opportunities have been opened so that foreigners can now start investment companies and employ the Kenyan workforce.

Kenya economy has emerged the best for foreign investment not just because of her trade sanctions but her ease of access and market penetration. Kenya’s consumer market is growing at a high rate and opening room for a wide market access. Her strategic geographic location has opened markets for foreign investors to capitalize on the private sector.

The consumer market in Kenya has expanded to include the global market in terms of demand and supply. Sanctions have been widened to include trade relations with foreign investors.

The Kenyan government in her legal laws has provided for incentives on foreign investment. These incentives include:

The G7, in a summit conducted last year and this year, revealed Kenya’s interest in expanding her diplomatic footprint. Kenya’s former foreign minister also stated her interest in developing diplomatic relations to African and Asian countries (i.e. India and China) in an aim to consolidate her position in the global economy.

Compared to other African countries, Kenya remains attractive to foreign investors. The government has laid strategies by ensuring good infrastructure, favorable business environment, and great international trade relations which attract more and more investors. In case you may be planning to invest in Africa, then you should consider Kenya.

How to Work Full-time and go Back to School as an...