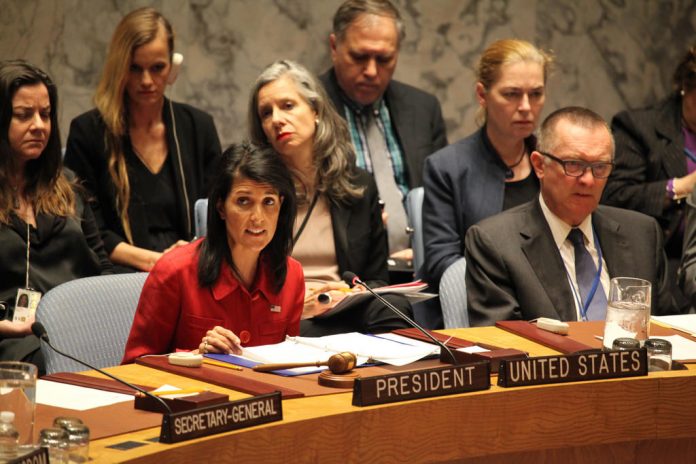 Yesterday, the UN Security Council (UNSC) adopted a feckless Presidential Statement on reports of migrants being sold into slavery in Libya.

The Statement started out with a strong condemnation;

“The Security Council expresses grave concern about reports of migrants being sold into slavery in Libya. The Council condemns such actions as heinous abuses of human rights which may also amount to crimes against humanity.  The UNSC calls upon all relevant authorities to investigate such activities without delay to bring the perpetrators to justice and hold those responsible to account.”

Then, it ran out of steam…

LIBYAN STABILITY OVER CRIMES AGAINST HUMANITY

Oddly, the Statement seemed to focus more on the stability of Libya and its embattled leader as was the only way to help improve the living conditions of Libyans and the migrants…rather than emphasize the crime of enslavement of human beings;

“The Security Council reaffirms its support for the United Nations’ Action Plan for Libya, reiterates its call for all Libyans to work together in a spirit of compromise in the inclusive political process facilitated by Special Representative of the Secretary‑General, Ghassan Salamé, and emphasizes that a stable Libya is the only way to help improve the living conditions of all people in Libya, including migrants.”

Rather than address some of the obvious root causes of this horrific situation – racism, joblessness, corruption, neglect, etc. – the Statement blames “unmanaged migration”;

“The Security Council further underlines the need for coordination of efforts to tackle the root causes of large movements of people, including forced displacement, unmanaged migration and trafficking in persons, in a comprehensive and holistic manner, to prevent exploitation of refugees and migrants by smugglers and human traffickers, as well as for implementation of the 2030 Agenda.”

The US Ambassador to the United Nations, Nikki Haley (a permanent member of the UNSC) said, “It’s critical for the Security Council ‎to speak up when human rights abuses threaten the lives of innocent civilians. Reports that people escaping violence are being sold into slavery in Libya are horrifying. All countries must do everything they can to end this barbaric practice. Until that time, those committing these unspeakable crimes must be brought to justice, and the victims must be treated with the respect and dignity that they deserve.”

However, Petr Iliichev of the Russian Federation (another permanent member of the UNSC) stated that, although he had supported the statement due to his country’s concern over the reports of slavery, he regretted that his proposal to also condemn the circumstances that led to the chaos in Libya, the military intervention of 2011, had not been considered.

Clifford Owusu: In An African Home, Yes Means No