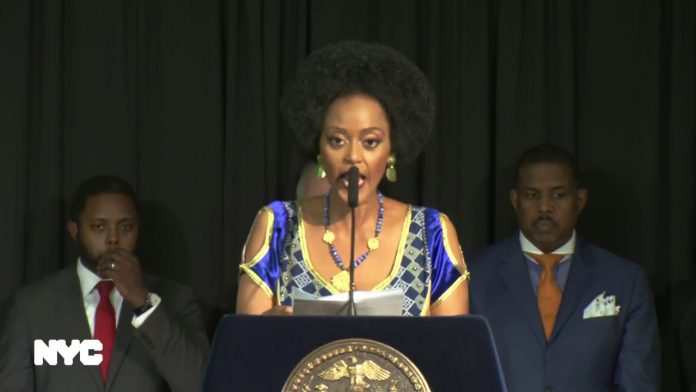 Many Pan- African leaders in New York State have dreamt so much about African community coming together. None of them, however, was prepared for yesterday evening at the Gracie Mansion, the official  residence of New York City Mayors. Hundreds of Africans, many of them in different traditional attires and outfits, graced the NYC 2018 African Heritage Month Reception with style, elegance and pride.

Hosted by Mayor Bill De Blasio, this African Heritage Month event was the first of its kind in New York City. In the age where anti-immigrants rhetoric pervades US politics, and several policies churned out of Washington are often laced with hatred of ‘others’, the event was a solidly calculated move by a shrewd and  progressive leader. Africans in turn showed their sense of appreciation not just by attending, but also by being there genuinely as a people who recognizes that though they are bi-coastal, New York City is home.

Many high-level occasions like this would be attended only by the elites, but De Blasio’s African Heritage Month Reception was all about the community and its people. It was not scented by that regular foul smelling hierarchical ‘Who is Who’ rule of order. If you serve African community in any way or form, chances are that you’ll be at this occasion. Additionally, we were not in an airplane where people are often segmented into different seats, and are offered different foods. We were at Gracie Mansion last night as a family, and as a community.

For me, it was a delight to be there. I arrived  sighting my college teammate, Isaac Katalay, performing. My evening started with a glass of white wine, and only then I could afford to dance. I had the opportunity to finally meet in person, Charles Dialor Fall, the Democratic nominee for NYS Assembly, Staten Island District 61, and a son of Guinean immigrant parents, and Tsidii Le Loka, the brain behind the role of Rafiki in that Disney iconic film, The Lion King. Sister is beautiful body and soul, and indeed, worthy of the night’s award which was presented with the night being named for her.

African community in the United States is growing, and so is our contribution to the City we love. Going by the US Census Bureau calculation, there will be roughly 246,000 foreign born individuals in New York Tri- State today. This figure increased significantly when we add up  the numbers of children born/raised by African parents. Interestingly, our growth isn’t only in numbers. Africans have the highest education attainments in the country, and our buying power increases daily. We take our service to this country and the City of New York very seriously even as we maintain our bonds with families in Africa. This event speaks volume for it recognizes that we are here, and that we matter. As a community, we are very grateful to Mayor De Blasio, and to our one and only Bronx Borough Director & African Liaison, Fammod Konneh and his team for ensuring a very well organized event.

Do you have any thought on how to better bring Africans is NYC together? Share your thoughts at comment section below.

USAIG is a community media organization that focuses on African immigrants in the United States. We offer community content and promote African identity. We support personal and professional development of Africans and immigrant community in the US. We consult on cultural based training focusing on inter-generational relationships between African youths, parents and community, and we facilitate diversity and inclusion training workshops.