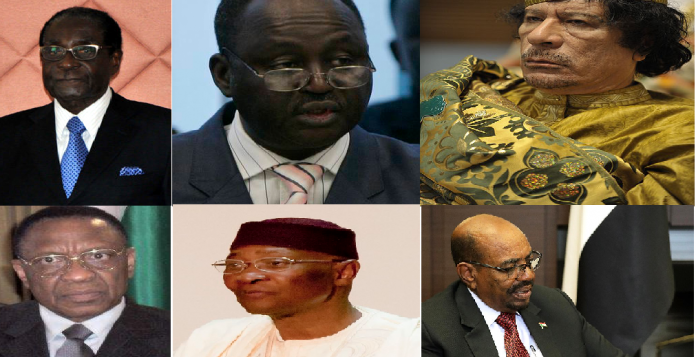 Africa is one of the continents popularly known to have the longest serving presidents. However, things seem to have taken different directions following recent events taking place. Though ousting of Presidents is not something new, Africa appears to have woken up and is ready for a change. Detailed below is a list of African presidents ousted from power and what the move means to Africa. Take a look!

Kwame Nkrumah was the first president of Ghana and one of the famous leaders in history. Though he fought for his nation to become sovereign, his tenure was full of dictatorship and Ghanaians did not hesitate to take action. He was overthrown through military and coup d’état in 1966 while he was away in a peace mission in Vietnam.

Mamadou Tandja took power in 1999 as the NIGER President. After ruling for a decade, Mamadou decided to manipulate the constitution to extend his term, but his plans were futile. During his tenure, Tandja was accused of massive corruption and abuse of office which saw him ousted in 2010 through a coup.

In 2011, the above four presidents were ousted out in Egypt, Tunisia, Libya, and Ivory Coast respectively. Hosni Mubarak was overthrown on Feb 11, 2011, after ruling for 30 years. He was accused of dictatorship and massive killings which send him to exile for six years.

Zine El Abidine Ben Ali of Tunisia was accused of corruption which led to massive protests to overthrow his government marking the end of his 23 years term as President. He was forced to seek asylum in Saudi Arabia with his family.

Muammar Gaddafi who ruled Libya for 42 years was a dictator who was linked to terrorist attacks. He was captured and killed on October 20th, 2011.

Laurent Gbagbo served as the president of Ivory Coast for ten years. After presidential results were announced in 2010, Laurent Gbagbo did not recognize Alassane Ouattara victory which led to a crisis which lasted for more than four months. Laurent was accused of massive killings, rape, and other human rights violation and on April 11, he was ousted.

A month later, President Raimundo Pereira was not spared. This was after two presidential polls were conducted which saw him and his prime minister kicked out of office by military troops.

Francois Bozize came to power in 2003 through a coup as the president of Central African Republic. His term in office was marked with conflict and dictatorship. Though he managed to rule for a decade, he did not deliver as per peoples expectation which saw him ousted from office in 2013

President Blaise Compaore of Burkina Faso was overthrown by a revolt after his efforts to extend his 27-year tenure. This saw him flee the country to seek refuge after a court arrest warrant.

In 2017, Yahya Jammeh handed power after his 22 tenure. Yahya who took power as the President of Gambia in 1994 was overthrown through a coup. The Gambia Ex-president lost his seat after the first Gambia’s democratic transition which saw him flee the country to seek asylum.

After 37 years of brutal rule, President Robert Mugabe was ousted by coup after a massive economic crisis was witnessed in Zimbabwe. Mugabe was one of the African presidents who clinched to power.

President Omar Al Bashir is the ex-president of Sudan who was recently ousted on 4th April 2018 marking his 30 years tenure. His government was accused of massive corruption, genocide, and human rights violations. Omar Al Bashir fled the country after four months of protests.

If you carefully examine the above list, all the African presidents ousted, have a lot in common.  High numbers of them were accused of corruption, dictatorship, greedy for power, human rights violation and misuse of office. This is a wakeup call for other Africa leaders who are victims. Africa is sick and tired of lousy leadership and is ready for a revolution.