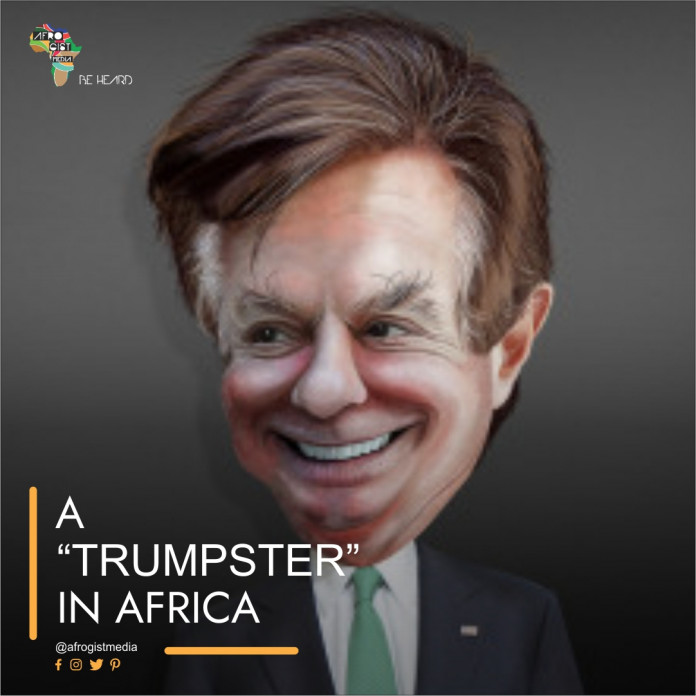 Before Paul Manafort became a household name here in America, he was already well-known to many of Africa’s political elite.

Manafort. is an attorney, lobbyist, and a political consultant. He joined Donald Trump’s presidential campaign in March 2016 and served as campaign manager from June to August of that year. Manafort was recently indicted by the US Justice Department’s special prosecutor on 12 charges including; fraud, conspiracy and money laundering.

These charges come as no surprise to K. Riva Levinson.

Levinson, a consultant, is the author of Choosing the Hero: My Improbable Journey and the Rise of Africa’s First Woman President. According to her bio she is also, “…the long-time advisor to Africa’s first elected female President, Ellen Johnson Sirleaf, and KRL (her strategy consultancy company) is the company of record for the government of Liberia in Washington, DC credited with supporting Liberia’s post conflict transformation.”

She describes him as, “strategic, canny, demanding…lacked a moral compass” and that working for him, “nearly broke my spirit.” Levinson’s tale of working with Paul Manafort is a sordid one.

“A few years out of college, in 1987, I landed a job as an international field operative for BMS&K — Black, Manafort, Stone & Kelly, the capital’s very first bipartisan lobbying firm. Manafort himself hired me after I promised that “there is no place in the world I will not go.” And I got what I signed up for: In more than a decade working for him, there was no place that Manafort would not send me.

According to a Newsweek cover story that year, BMS&K was “the hottest shop in town.” The service it provided to clients was part politics, part public policy and part commerce, a curious mix of self-interest, selflessness and opportunism that could exist only in our nation’s capital. BMS&K got paid to change policy and alter opinions. It could be for something as narrow as a modified export regulation, or as all-encompassing as building strategic alliances against America’s enemies, real or perceived.

The late ’80s was a time of global upheaval. Following Ronald Reagan’s presidency, we were in an era of proxy wars and freedom fighters. The Soviet Union was beginning to teeter. So foreign governments and other political interests were willing to pay us millions of dollars to ensure that they were properly allied with the United States. And we did it all: We organized congressional delegations and advocacy trips to members’ districts, coordinated head-of-state visits to Washington, handled font-page media placements, prepared white papers. Whatever it took.

You never knew what would come at you at BMS&K. It felt random and totally unpredictable. One autumn afternoon in 1989, Manafort summoned me to his office and announced he was dispatching me and my colleague, John Donaldson, to Somalia. We had three days to prepare.”

“The mission: Meet with its ruler, Siad Barre, and get him to sign a contract for $1 million, with $250,00 up front. The deal was pre-sold to Barre by one of Manafort’s shady intermediaries. We just had to collect the signature. Our assignment would be to clean up Barre’s international reputation, which needed plenty of soap. An Africa Watch Committee and other human rights organizations, including our own U.S. State Department, had documented a long list of barbaric acts carried out by Barre and his ruthless cadre of Red Berets.

I told Manafort it didn’t seem like a promising strategy to march into a murderous dictator’s office and point out to him and his lieutenants that he has a public relations problem. “Are we sure we want this guy as a client?” I asked, in a garish display of naivete. Manafort sounded annoyed, as if I had asked the right question at the wrong time. He waved off my concerns as he settled into his large leather armchair in his spacious corner office overlooking the Potomac River, the walls adorned with photos of past presidents, U.S. senators, congressmen and other notables. It was intimidating, and meant to be. Manafort was regarded by my colleagues and me as a master geopolitical strategist. He was one of those rare individuals who could cut through the noise, get to the heart of a problem and hit on a solution. And he didn’t care about the collateral damage. I eventually learned that the hard way.

As he showed John and me out the door, he said, “We all know Barre is a bad guy, Riva. We just have to make sure he’s our bad guy. Have a great trip!”.

John and I arrived in Somalia just as the capital, Mogadishu, had become encircled by rebels seeking to overthrow Barre. We never got our meeting with the embattled leader, who fled to Libya in search of arms — a pretty unique reason for canceling a meeting. John and I barely managed to get out of the city before it fell. We bribed our way onto one of the last flights leaving the country, a Somali Airlines flight to Cairo.

We returned to Washington, D.C. without our luggage or the signed contract, though we did carry back a memorable souvenir: amoebic dysentery. The mercenary African adventure left me feeling dispirited. I needed to cleanse my soul.”

“I was deployed in September 1992 as BMS&K’s sole representative during the country’s first-ever democratic election. The historic contest pitted the communist government against the firm’s client, the National Union for the Total Independence of Angola (UNITA).

By the time of the election, BMS&K had been working with UNITA for several years, and was responsible, in no small part, for the Reagan Administration designating UNITA as a “freedom fighter” movement, making it eligible for covert funding to fight the government and their Soviet and Cuban allies. The international community hoped that the ’92 elections would finally bring peace to the country, and permit democracy to take root. And Manafort was convinced that UNITA would win. Both assumptions proved false.

The U.N.-administered election was a logistical disaster, with only 17 helicopters deployed to move completed ballots in a country twice the size of Texas. When early results from the urban areas showed the government’s clear advantage, UNITA cried foul, and the capital, Luanda, became extraordinarily tense. You could tell the various party militias were ready to start fighting.

I went to the National Electoral Commission downtown to urge that UNITA’s concerns be taken seriously so that calm could be kept while the final vote count continued. After a pointless two-hour visit, I emerged from the smoke-filled office, famished, and looking for my vehicle. As I approached the street, a firefight broke out — rapid, staccato automatic gunshots. Everyone scattered. I dove under a white Jeep with U.N. emblazoned on its side, and waited, and waited. I felt extremely alone. Why had Manafort sent me here by myself?

After the shots had subsided, I climbed out of my sheltering place, shaking uncontrollably. It took me a while to reset myself, remember where I was, and what I was doing. After the incident, the U.S. mission urged me to leave the country. Officials there were unsure whether I was a target. Two weeks later, the country was at war with itself. The election process was never completed. Thousands of UNITA sympathizers were killed, along with many friends, including some who had escorted me onto my flight out.”

“I was traumatized, depressed, almost in mourning. Worse, I felt responsible. Our efforts might have contributed to the misery inflicted on the Angolan people. As for Manafort — well, there was no self-reflection. It was simple: We lost a client. He saw no reason to dwell on it. I shouldn’t take it personally, he told me.

But that was my problem. I took everything personally, questioned myself, the firm, the mission, and the point of it all. And when it wasn’t enough to rationalize that I was gaining experience to deploy for better use elsewhere one day, when I could no longer justify the unjustifiable, it was time to leave Manafort. That was 22 years ago.”