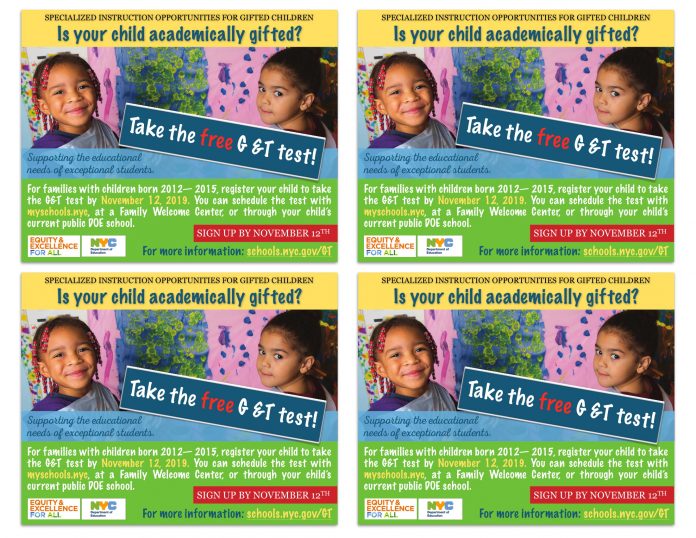 Did you know that there’s a program called Gifted and Talented with the New York City Department of Education? If you don’t, it’s not uncommon. According to statistics, about 75 percent of 16,000 students in the program are Whites and Asians (mostly Chinese). but not a lot of parents of minority children know about this program or even care to get their children into the program.

What is Gifted and Talented Program?

It starts from pre-kindergarten age. Parents sign up their kids for a standardized test around October and early November, and prepare them to take the test early spring of the following year. By the time the test result comes out, usually around June, the kids that make it in will begin their kindergarten at certain selective schools In September.

The curriculum in Gifted and Talented selective schools is very rigorous, and it’s not impossible that the kids are one year advance in learning than their counterparts who are in non selective schools.

More significant is the fact that the collective body of parents at these schools are a mix of either privilege, educated and/or middle class helicopter parents who are determined to push their kids for better. Even those that are poor among these parents understand how to tap into free available resources everywhere around the City -from library to Parks program to sew together a promising future for their children.

These parents are usually the parents that would naturally execute the stringent codes of Success Academy Chatter Schools except without any manual or prompts to do so.

What are some of the Promises of Gifted and Talented Schools?

A striking feature of Gifted and Talented program is the grace to override zoning. You can live in zone B on the letters of alphabet, and go to school as far as zone T, for example.

Per Mayor De Blasio, a system like the Gifted and Talented program is creating an unintended consequence: school segregation. Using behavioral analyses, the parents described above maintain a different type of mindset and lifestyle that would ultimately draw a line. Indeed, that line had been drawn over time, and for this reason, Mr. De Blasio and some NYC elected officials are moving to phase out G and T along with other public school admission processes that require testing and other behavior screening.

Zoning, which is historically the root of education segregation to begin with, is getting little attention. Understandably, it’s complicated. Messing with zoning is a political suicide in life and possibly also in reincarnation. Conversation around education equality will quickly balloon to major issues like tax, real property, and before you know it, you are in a different heated fight far from where you first started.

Until the fate of Gifted and Talented is finally determined, registration is currently going on, and it ends on November 12th. To the families from undeserved communities, you don’t win a fight by not showing up. See the flyer here, go to the link and register your little ones, or go to any public schools around you to obtain guides and support on how to register.