Home Blog & Buzz NYC Mayor and his Police Commissioner met with the media on George... 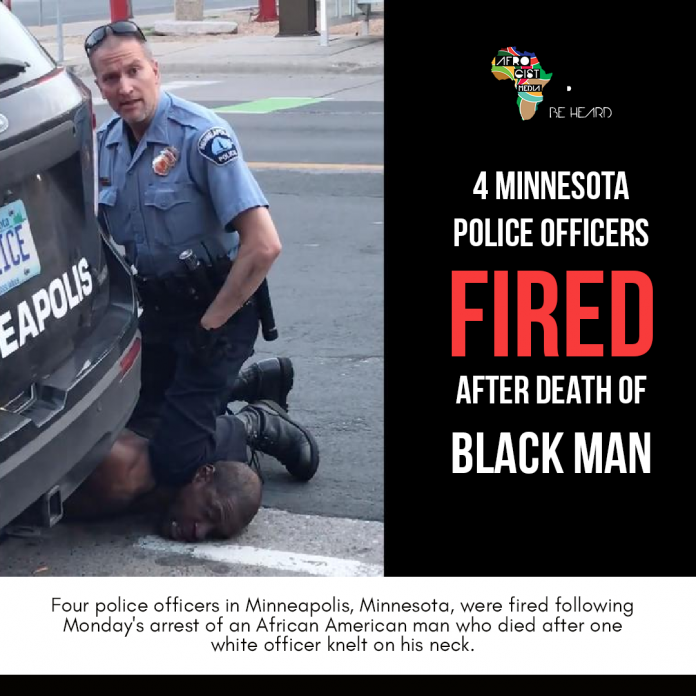 As the people of Big Apple protest the death of George Floyd, another recent murder victim of the United States racist system, the New York City police commissioner and his boss, Mayor de Blasio, declared their stance on the issue, and warned protesters to protest peacefully. Read the transcript below:

Mayor Bill de Blasio: We’re here to address a very painful reality. There are demonstrations happening as we speak in this city and they’re happening because a man is dead. George Floyd is dead. He’s dead because he was black. He was killed because he was black, it’s as simple as that, it’s as horrible as that, it’s as painful as that, and it’s unacceptable as that. And there are people right now all over this city, all over this country expressing that pain, that anger that someone was killed simply because of the color of their skin in 2020, in the United States of America. And we cannot in any way pretend this is anything less than an indictment of the kind of racism that still exists all over this country that is so painfully alive and well in so many of our institutions that we have to find a way to stop, because it will corrode this nation, this society, the city if we don’t overcome the racism surrounding us at all times.

This man was killed in broad daylight. The officer involved seemed to show no emotion whatsoever that he was taking a man’s life. And imagine what that says to people, imagine how much anger that creates. It would create deep, passionate pain if it was the only time it ever happened, but it’s happened time, and time, and time again. And people are asking, when will it ever stop? That’s why there are so many people protesting. I have to acknowledge, when I was a young man growing up, I never had to, for one minute, wonder if a police officer would stop me and treat me negatively because of who I was – never even crossed my mind. And I think for all of us who happen to be white, the vast majority of us, we just haven’t experienced it. We haven’t walked a mile in the shoes of our brothers and sisters who are people of color who have dealt with this pain so often. So, what we are seeing coming out in this city and all over the country right now is that pain, that anger from what people have grown up with and never for a moment been able to get away from, that sense that at any given moment they might be singled out simply because of who they were and that the results could even be deadly. That that is what people are grappling with every minute of every day. I need those of you out there who are listening and watching and share the same skin color with me, we’re all trying to understand. I’m asking you to understand more deeply, think of every minute of your life if you have to wonder if what happened to George Floyd would happen to you or your children. So, when I see this pain, I can only try my best to understand it.

Now, to all the people who are protesting – please, even if you’re expressing that pain, that anger, that sense that something’s wrong and must be fixed – please remember how important it is to protest peacefully. Remember, the only way we’re going to make things right is by somehow finding a way to work together. Please remember that we’re in the middle of a pandemic. We have to do all we can to protect each other. Everyone out there has a responsibility. And even though I think – I think I understand some piece of the anger you’re feeling, I am still beseeching you. We are still all in this together and you must protest peacefully. Be mindful of what it means for everyone around you. Now, our police officers have been given a very clear instruction, as always – respect, peaceful protest. We in this city have a long history of respecting every kind of viewpoint, that is the essence of New York City. The NYPD protects and respects peaceful protests and the NYPD will also make clear what the ground rules are and ask all protestors to recognize those ground rules and respect them. Commissioner Shea will speak to that more. But I’m going to also offer this thought to all those who protest – if you are angry with the government, if you’re angry with the elected leaders, direct that anger to all of us, because if we haven’t done enough, then we – we are the ones who should be held responsible. But the police officer in front of you is a working man or woman just trying to do their job. They did not create the policies. They did not create the pain. They did not create the contradictions of our society that we need to resolve. Take your anger out on those who hold the power, wherever it may reside. But please try your best to understand that the working man and woman in front of you is your fellow human being just trying to keep the peace.

With that, I turn to Commissioner Shea.

Police Commissioner Dermot Shea: So, I think the key point here with this evening’s protests on the heels of yesterday’s protest where we had a number of arrests made, unfortunately, and a number of offices that suffered injuries. The NYPD is out here in force tonight. We will have thousands of officers deployed throughout New York City to cover the normal events that take place on a Friday night in New York City, as well as the two protests that are scheduled for tonight. And our goal is simple – our goal is to allow people to peacefully assemble responsibly and voice their opinion, voice their concerns. And we’ll do everything we can to work with you, protest organizers, to make sure that happens. What we are asking everyone – and I thank the Mayor for his comments – to please exercise caution. Please, let’s do this safely. Let’s come together not only as a city, but as a country to face these issues, voicing the concerns. Protesting is part of the American way of life, but let’s do it responsibly and let’s not do it that endangers anyone further. Thank you.

Unknown: Questions for the Commissioner [inaudible] –

Question: Mr. Mayor, you said that people on the streets tonight should direct the anger at politicians and people in power, such as yourself. Some of the people last tonight [inaudible] to be angry at you and the NYPD. What decisions do you think you have made or haven’t made over your tenure as mayor that would create that sort of anger, anguish that we’re going to see?

Mayor: We obviously haven’t gotten far enough. And I understand anyone that sees a situation like this and says, how could it happen in this country still, that their anger is pure in that sense. They’re right, it should never happen in this country. So, even though I believe in this city we’ve changed policing tremendously, we’ve changed the relationship between police and community foundationally, we clearly have not gone far enough, and we have to keep showing that we will take even greater steps. People have to be able to look at the police and feel the police fully represent their communities and that they have no question in their mind that they’ll be treated fairly. And if a video in Minnesota looked to people as something they couldn’t relate to at all in their own lives here, that’s the day we’ll know that we have succeeded, but we’re not there yet. So, we’re going to teach our officers even more deeply the things we’ve been doing to work with communities, to get to know people in communities on a human level, to communicate, to deescalate. And we’re also not going to tolerate officers who can’t live by those rules. It’s very clear that people need to know that if someone shouldn’t be on the police force, they won’t be. And that’s something we’ll keep our devotion to, to show people that this is a police force of those who are of, and by, and for the community.

Mayor: Look, I think it was handled exactly the right way. And I think that we have to be within the boundaries of the law. We understand that there are challenges with State law, but nonetheless we have to be as transparent as humanly possible. It is important for people in the city to see transparency. It’s important for them to see that there are consequences for bad actors. We also have to be clear about the policies, that if a policy isn’t working, we’re going to do something about it. Commissioner Shea and I talked about the social distancing enforcement and we realized that even though it was motivated by a desire to protect people from the coronavirus, it was the wrong policy. It was up to us to change it and we did change it. The NYPD is not going to be enforcing –

Question: [Inaudible] released in this one instance, why not release that information all the time? Let the public know [inaudible] –

Mayor: Within the boundaries of law, it’s exactly the right thing to do to alert people that these kinds of charges are coming. Anybody else? Okay. Thanks, everybody.

Question: [Inaudible] opposition to the 50-a repeal – legislation in the State – is that something that [inaudible] –