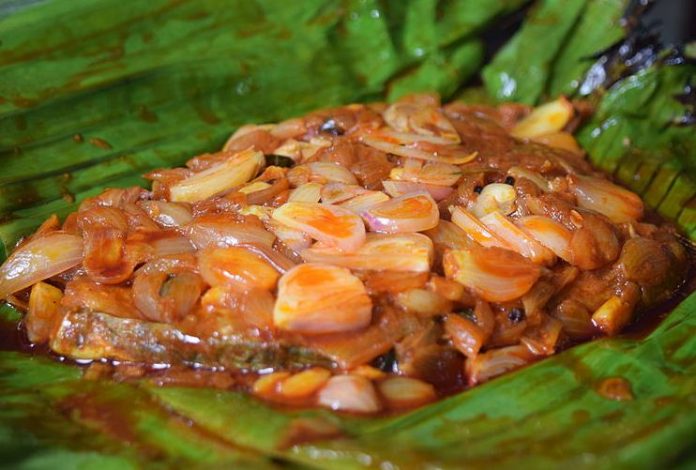 Liboke ya Malangwa is a Congolese dish prepared by wrapping fish fillets or whole fish on banana leaves and cooking it over charcoal fire or grill. To enhance its flavor, the fish is marinated with traditional spices for a sapid and savory taste. All the spices need to be well quantified to avoid ruining the entire meal.

One thing that makes this amazing delicacy one of its kind is its cooking method which enhances its flavor. The cooking method is popularly used in African countries like Uganda, Congo, and central Africa. Cooking food in wrapped banana leaves is known to give food a distinct flavor that nothing else in the world could give.

Is Cooking With Banana Leaves Healthy?

You may be wondering whether cooking your food in banana leaves is indeed healthy. The answer is yes. People across the world have adapted to this mode of cooking. One thing that makes banana leaves great for cooking is additional nutrition benefits. The leaves are loaded with crazy antioxidants levels which get absorbed into the food.

Though the leaf should not be directly consumed, its naturally occurring antioxidant is known to prevent cancer, heart issues and reduce the chances of developing other health complications.

Traditional dishes in Thailand, Malaysia, and Singapore are enjoyed on banana leaves. In South India, festive delicacies and wedding meals are also served in banana leaves. In Ghana, Togo, and certain parts of Ivory Coast, food like Kenkey and Dokunnu are served in leaves.

Now that you know the benefits of leaf cooking, let’s delve right into Liboke Ya Malangwa and Congolese cuisine.

Congolese culture is a mixture of traditional and that of her colonizers. While France is said to be behind the cuisine felt here, the country has managed to maintain its traditional cultural identity. Crop farming and cattle keeping are some of the cultural practices that have greatly influenced the cuisine.

Most traditional dishes comprise of one or more ingredients listed above.

When food is ready, men are served first, then women and children. Hand washing is done before and after meals, and only the right hand is used to enjoy the dish.

Food taboos are common but depend on the village or the tribe one comes from. If an animal is viewed as a totem, people from that village, clan, community, or family cannot eat that animal as it is their spiritual protector.

In Congo, if an animal is a totem, the family does not consume it as it is their spiritual protector Click To Tweet

Just like the Ashanti people, modern day Ghana, the majority of Congolese ethnic groups are matrilineal. Cousins from the mother’s side are viewed as siblings of the family. The oldest uncle from the mother’s side is given much respect, and has a greater influence to the degree that a father has on his child.

In some Congolese communities, the old uncle from the mother's side has more influence than the father. He takes care of the kids education, career selection, job hunting and spouse selection Click To Tweet

In most sub-Saharan African countries, fathers are mostly responsible for their children’s education, career selection and job hunting, and spouse selection. In some Congolese ethnic communities like Bakongo, however, the oldest uncle from the child’s mother’s side takes up all these responsibilities.

If you love this Liboke Ya Malangwa recipe, you may also like:

Upcoming Films to Watch in 2020 By, For, and About Black People