Home Blog & Buzz The Future of Africans in the US 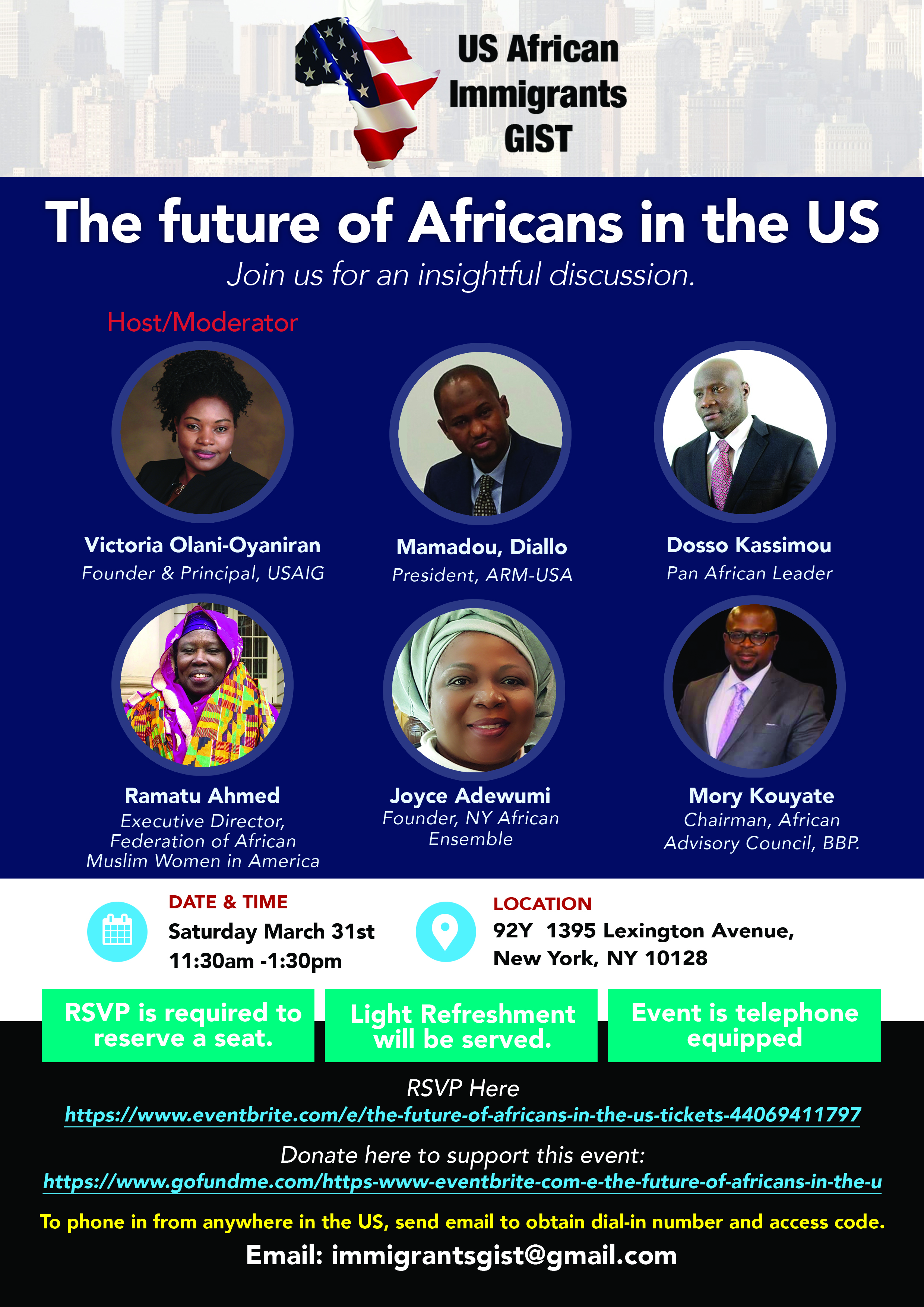 The event that was planned initially for this month was ‘How I Did It’.  It was designed to bring in successful immigrants from our community to share and inspire their fellow brethren. None of the speakers that were invited could commit at this time. Fortunately, two of the speakers that were invited were kind enough to reply with thanks but thanks. And this is very much appreciated. If  USAIG social network is able to reach farther to bring in just one of the big guys who swim in public money in Africa; its events, which are mostly free with a record of scanty attendees might  be overbooked. If it can just access the court of some in Africa that are crowned with the office titles -which they themselves could hardly understand – and have them speak at its events, photo opps might just create a line up of attendees.  But here is a positive; forward looking alternative thought: talks on how immigrants have weathered the storm of surviving and succeeding in a foreign land is only but a part of the conversation. Only a few people wants to talk about that, and really folks can get their inspiration elsewhere.

The real talk, the one that not a single African on the US soil should ignore, is the future of Africans. That identity; the rich culture, including those that we romanticize, will only last a generation if we do nothing. If there’s no coming together of our community to further establish the identity of Africa; promote and celebrate what we share in common; help to further connect our cousins  here and aid in the assimilation of the larger diasporic Afro-ethnic identity, the culture, which is organically African, will continue to be ‘processed’ in the popular social construction lab and simply labeled with the color identifier: ‘black’. Name your children African names if you like, it doesn’t change a thing. How much meaning does it have if Nkem, Kwame, Mopelola, Mbandi, Ndiaye,etc don’t have a community they can easily access and identify with? We come here, work hard and get these big degrees and somehow assume everything is alright. Is it? The truth remains that  the force that is responsible for African people’s flights off the continent to begin with, is still at work.

The Meaning in Names-

It is not a myth that the process of naming is sacred to African people.  Individual names have meaning; believed to have the capacity to channel one’s  destiny, thus any social construct that aims at maintaining a patriarch kingdom will first give its ‘subject’ a name, and then give that subject a definition. From there the named will go on answering  the given, and conforming as defined. Here is where the danger for misconception always lies: the point is not about one race against another. This is naive. The cloud is speedily moving away from this dynamic , and in a generation or two, the conversation would change. The point, however, is  Africans and its diasporans remain vulnerable in the hand of any society that comes to stealthily claim that patriarch status as long as the name and the definition status quo that it has long been duped stand unchanged. A good friend said it all. He said “ gradually we’ll all travel abroad only to go back home and start purchasing our lands from the hands of the new owners”.  The minerals and all those goods things lacking in other parts of the world, that the brave men and women forth to gain its control sixty years ago, will soon start to be sold back to Africans. There’s no more take-over, but only hand-over.

We as a people born and bred in Africa living in the US have a role to play in what becomes of Africa tomorrow. We are endowed with the resources to do something, even if that something is as simple as coming together.  Many of us come here; hustle with extreme focus and discipline, and achieve American dream. It is proven that individually we can achieve social mobility, but only united, we can achieve social respect. Curious on how the Jew community in the United States, who  was once reduced to names by the “Nordic” Americans, made it to the top of the chain? Karen B. Sacks (1998) explains:

“the myth that Jews pulled themselves up by their bootstraps  ignores the fact that it took federal programs to create the conditions whereby the abilities of Jews and other European immigrants could be recognized and rewarded rather than denigrated and denied. The GI Bill and FHA and VA mortgages were forms of affirmative action that allowed male Jews and other Euro-American men to become suburban homeowners and to get the training……. Jews and other white ethnics’ upward mobility was the result of programs that allowed us to float on a rising economic tide. To African Americans, the government offered the cement boots of segregation, redlining, urban renewal, and discrimination”.

Those federal programs that created paradigm shift in the rising of the Jews both culturally and economically can ensue only from a body of advocacy. There is a human right issue here, the one that requires a new consciousness and a new movement.

Just as our present is intertwined with America so does the future of our children intertwine with Africa. Why not create a community strengthened to ensure that they belong?

Has this felt so far like some essay…..? Certainly not intended. It started with writing about the event coming up on 03/31 in NYC where every African in the US is invited to attend. There is a Go Fund me account (see link here https://www.gofundme.com/https-www-eventbrite-com-e-the-future-of-africans-in-the-u ) with  just $1000 to host this event free.  Business owners from African communities in Atlanta Georgia and leaders  in Texas are already signing up to share  their thoughts, and to represent.  Please don’t walk away just like that from this post. Do something. Come in, call in, support with donation, or send words of encouragement boosting energy for this work. Here is the link to eventbrite: https://www.eventbrite.com/e/the-future-of-africans-in-the-us-tickets-44069411797

So, let’s conclude at the event. Talk to you soon.

The Value of African Immigrants to the United States